One of the strangest crossovers you’re likely to find in comics just might be one of the most fun. 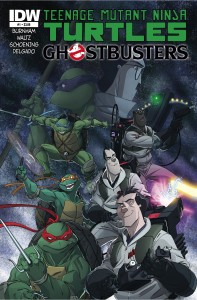 Transported from their own NYC to the Ghostbusters version of the city that never sleeps, The Teenage Mutant Ninja Turtles must team up with the boys in grey to take on a metropolis besieged with ghosts and a monstrous villain that lurks in the shadows. While there are actually a bunch of similarities between the properties, they’re still pretty darned different.

So how’d the idea to pair two of the most popular foursomes in pop culture come about anyway? Well, it actually started with the creative teams on both ongoing series at IDW who happen to be some pretty big fanboys.

“A couple of years ago, Tom Waltz and I chatted like the fans we are about how insanely fun this crossover would be if we ever got the chance to write it,” said series co-writer Erik Burnham. “As I sit here today, my excitement level is at eleven.”

“This is an idea that Erik, series editor Bobby Curnow, and I have bounced off each other for quite a while,” said series co-writer Tom Waltz. “And being as deeply entrenched in both properties as the three of us are gives us a unique perspective on how to bring them together. And what better time to do it than during the combined 30th year anniversary celebration?”

“Both Ghostbusters and Turtles are fun, funny and just a little bit weird,” said Curnow. “So putting the two together is a natural choice, especially when you consider the fact that Tom and Erik have worked on both properties for years. This one should be an absolute blast!”

Aside from Waltz and Burnham, TMNT/Ghostbusters will sport the art of Dan Schoening in both the interiors and on the covers of the four issue series. Schoening is the regular penciler on ‘busters and you can check out his work right now in the ‘Mass Hysteria’ story arc that’s currently playing out in the Ghostbusters monthly. He’ll be joined by the epically named T-Rex Jones, who’ll be doing a special variant cover for the fist issue of the set.

Jason's been knee deep in videogames since he was but a lad. Cutting his teeth on the pixely glory that was the Atari 2600, he's been hack'n'slashing and shoot'em'uping ever since. Mainly an FPS and action guy, Jason enjoys the occasional well crafted title from every genre.
@jason_tas
Previous Marvel announces Star Wars omnibus collecting the classic series
Next SDCC 2014: DST returns to the con with lounge at Taste and Thirst on 4th