Originally published in newspapers back in the mid-forties, these classic Wonder Woman comic strips are finally getting the star treatment with a collected edition from IDW. 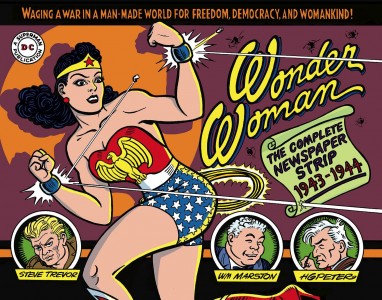 With her starring role (okay, co-starring) in the big screen Batman v Superman: Dawn of Justice film coming up, and more than likely another big part in the Justice League movie, Wonder Woman is hitting the big time like she hasn’t since Linda Carter donned the tiara and bracelets years ago. It’s only fitting then that maybe the biggest and most recognizable female superhero of all time should get a collection of some of her first and most hard to find stories.

Wonder Woman: The Complete Newspaper Comics brings together the entire original run of the Wonder Woman comics that first appeared in US newspapers from May 1, 1943 until December 1, 1944. Started up a very short time after the actual DC comic book began its run, the newspaper strip was actually written and drawn by William Moulton Marston and Harry G. Peters- the creators of the character!

Starting with Diana’s origin on the isle of the Amazons and then following her and Steve Trevor’s journey into the modern world in the United States, this is as classic a retelling of the Wonder Woman mythos as you’re likely to find. And at 196 hardcover bound pages, it’s no lightweight either.

Look for Wonder Woman: The Complete Newspaper Comics to hit bookstores some time this year.

The movies, music and television of the '80s are Jessica's obsession. She's a fan of almost everything from the 'me decade' including (but not limited to) Barbie, Jem, She-Ra, Ms Pac-Man and neon print anything.
Previous Crytek in Crisis talks over bankruptcy claims
Next Shovel Knight digs its way onto Wii U and 3DS