Home / Collectables / Excited for the next Skylanders? You can pre-order a Trap Team member right now

Excited for the next Skylanders? You can pre-order a Trap Team member right now

This might be a first for Activision’s Skylanders franchise, but you can pre-order Trap Team member Gearshift well before the game’s official release. 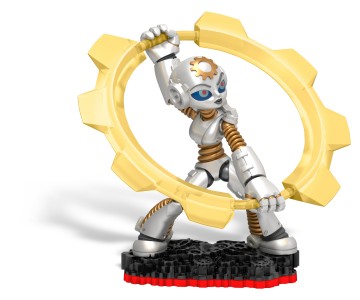 Skylanders Trap Team brings a ground-breaking innovation to the Skylanders franchise by reversing the magic of its signature Toys-To-Life™ play pattern to let kids bring life-to-toys for the first time. In the game, Gearshift was created on the Tech island of Metallana by King Mercurus, who considered the young robot to be his own daughter.  But rather than performing royal duties, Gearshift preferred to spend her time in the oily depths of the kingdom among its workers, secretly tending to the huge subterranean machines.  When her father discovered this, he was furious – but then a squadron of Undead Stormriders suddenly attacked.  Learning that these marauders wanted to capture her father, Gearshift used her knowledge of the labyrinth below to hide him.  Seizing the emblem of her people – The Great Gear – she used it to fight the Stormriders, inspiring the workers to rise up.  Together, they drove the Stormriders out of Metallana and saved the kingdom.  For this, Gearshift was made part of the Trap Team, using her new awesome Traptanium-forged gear to help defend Skylands.

Skylanders: Trap Team doesn’t release into stores until October 5th of course, but Trap Team member Gearshift is available right now… sort of. You can pre-order the figure “all major North American retailers”, while supplies last, as of right now.

A Tech element character, Gearshift is a Trap Team member, which means that she has some added strength against the game’s cadre of most wanted bad guys. She’s also going to be somewhat limited in release in figure form so, if you really want to make sure your collection is complete, you might want to go ahead and get that pre-order in while you can.

Jason's been knee deep in videogames since he was but a lad. Cutting his teeth on the pixely glory that was the Atari 2600, he's been hack'n'slashing and shoot'em'uping ever since. Mainly an FPS and action guy, Jason enjoys the occasional well crafted title from every genre.
@jason_tas
Previous Father’s Day gift ideas for the tech-savvy dad
Next E3 2014: Meet Activision’s big guns of the show