Mario Kart 8 manages to surpass its predecessors, making it arguably the greatest Mario Kart game in the series. 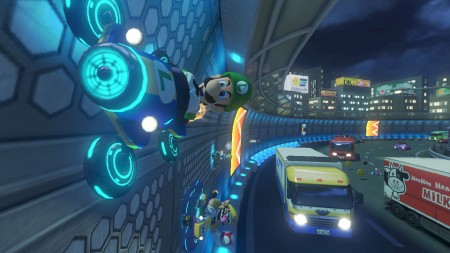 Mario Kart 8 recaptures the spirit of the franchise, with its insane courses, balanced item system, and innovation. The anti-gravity feature is quite possibly the best innovation that the Mario Kart series has seen. At first glance it simply seems like it just makes your wheels turn sideways and changes the way you see the environment, but this isn’t the case. It has given the developers a useful tool that makes the tracks more dynamic in nature; instead of having the flat and arguably homogenized Mario Kart Wii tracks, we get insane and incredibly fun courses that make all sorts of crazy twists and turns.

It really spiced up Wario Stadium; the anti-gravity section was hard, and incredibly fun. Going up this giant structure, and viewing it in a diagonal perspective while dodging fireball chains is thrilling. This new feature has breathed new life into the formula, and even revitalized some older tracks.

It’s also nice having the option to enter anti-gravity or not in certain courses. As for items, they have been rebalanced this time around. Instead of the hectic and frustrating nature of items that Mario Kart Wii had, Mario Kart 8 takes a more sound approach that rewards skill. The blue shell is rare this time around, and only appears once in a while. You also can’t just get any item you want in any place, so a lightning isn’t available for someone who isn’t in a particularly low position. The game also rewards more a strategic approach, as well as patience. You can no longer drag an item behind you while acquiring others; so you have to really think about whether you want to keep a green shell in case you get hit, or to relinquish it and grab something else.

Some new and interesting items have been included in Mario Kart 8, like the piranha plant that snaps at anything nearby. You can optionally mash the fire button too, biting your way along, boosting towards players ahead of you. You can bite coins, bananas, and even eat a blooper that’s about to squirt some nasty ink your screen. The airhorn is another nice addition to the item family, as it adds a defense option against the blue shell as well as other items. You can hit people nearby with a soundwave shock, although the item is pretty rare so if you have one use it wisely. The boomerang is an alright item, but not all that good, it’s basically like a green shell that travels back to your kart after you’ve launched it. Once you’ve used it up three times the item disappears, although you can toss it before hitting an item box to change your item.

Visually, the game is an amazing treat to the eyes; whether you’re racing in Rainbow Road over a beautiful golden city, or traveling across the bright and sunlit environment of Donut Plains, you can’t help but get a little awe struck. If there was still any doubt that the Wii U is underpowered, Mario Kart 8 easily does away with it. The use of dynamic shaders and lighting, the textures on the road, the careful application of bloom lighting all make for a gorgeous looking Mario Kart. The best part is, it’s all running at a smooth 60 frames per second; there are no hiccups, and the only time it dips below 60 fps is if 3 players or more are racing in split screen multiplayer. The resolution is 720p, but it’s hardly noticeable when you’re speeding along the track.

The music is superb, Nintendo had a live band perform jazz music for a number of different songs in this game. I say this as someone who normally doesn’t even like jazz, this music is amazing. My personal favorite theme would have to be Bowser’s Castle, it’s really heavy hitting with a nice use of the electric guitar. Even the remixes were redone, and let me tell you that some of them manage to be even better than their original counterpart, like Royal Raceway. Its next gen theme is definitely a step above the original Nintendo 64 version.

The online has been improved, with some new and very welcome features, like giving you the option to chat with your friends in between matches. Players can no longer monopolize certain tracks, as there are only 4 choices (three courses and one random) at a given time, and they change after each race. This was a much needed option, because homogenization happens all too often online.

People will exploit the system to get whatever they want at all times, leaving nothing else for the rest of the players. You can choose to either race worldwide, regional, in a tournament, or with friends. Like older Mario Kart games in the series, you can customize your kart, choosing between a set of wheels, karts, and gliders. Bikes have been rebalanced, meaning they’re no longer the best vehicles to use in the game. They’re better on courses with a lot of sharp turns, but the karts are better in straightaways.

Mario Kart 8 both innovates and improves the formula of the series. The anti-gravity feature makes courses much more fun and varied, the items and vehicles have been rebalanced, and the music as well as visuals are fantastic. It really does feel like the penultimate Mario Kart, and I highly recommend it to both veterans and newcomers of the series.

Well, my name's Christopher Deleanides as you all know and I'm the Nintendo Editor here at BG. I've been playing video games since 1992, and I've been a Nintendo fan the entirety of those years. My love for video games as well as Nintendo hasn't changed, and probably never will. The only thing that comes close is politics, as I'm very deeply involved in both local and international issues.
Previous Hunt: Horrors of the Gilded Age announced by CryTek
Next Conspiracy Files debuts on Destination America tonight