The second issue of Valiant’s Shadowman epic brings back Shadowman’s greatest villain, and possible only source of help. 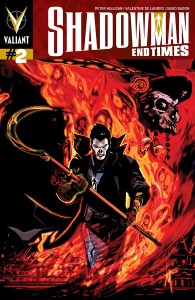 Only one man can help Shadowman now…his worst enemy! Forced to confront the greatest shock of his lifetime, Jack Boniface speeds down a self-destructive spiral he may never recover from. Exterminating the wild and evil loa spirits that haunt New Orleans at any cost, Jack has left himself with nothing to lose…in this world. By crossing the veil into the dark world beyond – the Deadside – will Jack save his own soul…or destroy himself?

It’s been an interesting time for Shadowman. Still definitely a character in flux as his newfound supernatural powers continue to change, Jack has his hands full with his own possessing spirit as much as he does with the nasties that go bump in the New Orleans night.

Bringing back Master Darque is a bit of a surprise as well, as is Baron Samedi. And Jack’s dad? Thought dead, the former Shadowman just might be alive and well. There’s a curveball for you.

Shadowman: End Times is looking sharp with a terrific story full of revelations for the title character and readers alike, and that super-stylish art by Valentine De Landro isn’t exactly hurting any. Expect to see the racks at your local comics shop haunted once again when Shadowman: End Times lands on in stores this week.

Jason's been knee deep in videogames since he was but a lad. Cutting his teeth on the pixely glory that was the Atari 2600, he's been hack'n'slashing and shoot'em'uping ever since. Mainly an FPS and action guy, Jason enjoys the occasional well crafted title from every genre.
@jason_tas
Previous Warhammer 40k: Storm of Vengeance (PC) Review
Next The Order: 1886 Delayed Until 2015 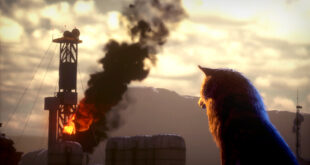