And Raptr’s most played PC games for April 2014 are…

Social gaming site Raptr names their top 20 most played PC games for the month of April. It’s not too shocking, but some surprises are definitely present.

According to the site, the PC was far and away the biggest and most played on platform for gamers once again in April, boasting some 1.2 billion players worldwide. That’s not on any specific game mind you, but across the boards. Though that’d really be something to talk about if it was.

As for those games on the list, the top five are all heavy hitters in the multiplayer arena. Numbers 1 through 5 I don’t think would surprise anyone with League of Legends, World of Warcraft, Diablo III, DOTA 2, and The Elder Scrolls Online all scooping up top placing. I am a little shocked that Counter-Strike: Global Offensive is that high up there and that there’s nary a Call of Duty to be found.

Check out the full list in the infographic below. 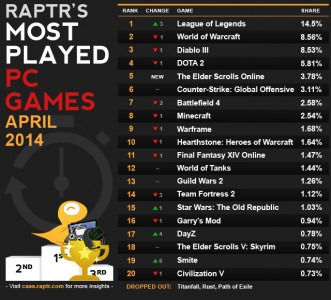 Jason's been knee deep in videogames since he was but a lad. Cutting his teeth on the pixely glory that was the Atari 2600, he's been hack'n'slashing and shoot'em'uping ever since. Mainly an FPS and action guy, Jason enjoys the occasional well crafted title from every genre.
@jason_tas
Previous Ultra Street Fighter IV battles for pre-orders in new trailer
Next New Bundles For Indie Royale And Humble Bundle