The side-scrolling console title sinks its fangs into the PC. But three years after its initial release, does it still have the bite to take a chunk out of gamers looking for a bloody good time?

Bloodrayne: Betrayal is a simple hack and slash. You press one button to kill your enemies. There are no fancy combos, no overly complicated mechanics, you move to the right and you kill whatever comes in your way. This is until the final chapters in the game. “Frustrating” does not even scratch the surface of what you feel playing those levels. It seems the developers felt the need to spice things up and add a second genre to their game: that of the platformer.

Since the game was released in 2011, I feel as if the success of platform games like Super Meat Boy and Bit. Trip Runner made the developer think they could cash in on the hype at the time. It goes from a simple hack and slash to a platform game. And this doesn’t happen gradually either, there are hardly any jump challenges in the better half of the game. Then comes chapter twelve… like a freight train. I spent more time playing the last chapters than playing the entire rest of the game. I had to take several breaks because it was just too eye-scratching annoying to deal with.

The jump and dash is the one ‘’mechanic’’ you need to use in all of the platform challenges. Just jumping seems easy, but there is no double jump. Instead, they place flies everywhere on which you can jump by pressing two buttons simultaneously.  While the fly-jumping is annoying, the added obstacles really finish the job in making it one big cluster-youknowwhat.

As if they hadn’t squeezed enough in the game yet, of course it also needed some puzzles. Halfway through, you get a heating gun that is only useful for the puzzles. You have to heat up plates to unlock doors or overheat weird looking purple skeletons that blow up some kind of granite material. Some blockades need to be destroyed by explosives. Not just regular explosives, that would be too simple and clear; you need to poison vampires with your fangs, after which you can blow up them with the press of a button.

But wait, there’s more (without spoiling too much). There are also parts where you play as a bird. After doing all the random stuff, I began to just give up on making sense of the game and just tried to finish it. The bird parts are just terrible. All you do is press the dash button and it’s done. You may take a bit longer if you really don’t want to take any damage, but even then it hardly takes any time at all to get through.

Since there are two prequels, there is already an established story around the character. Put into the world as a product of sexual assault between a female human and a male vampire. Rayne, the main character, made it her mission to kill her dad after he murdered her mother’s entire family. You won’t hear anything about that in the game though. Even worse, there is hardly any story at all. I felt absolutely clueless about what was going on. You only know that a big scary dude is her father and that Rayne wants to see him dead.

At the end of every stage, you get a scoreboard. It shows you the amount of points you earned and some bonus things. So while you may finish every level, your score can be terrible. Withholding all the platform mess, I found the game relatively easy. My score, however, was a miserable F on every level. I guess I’ll have to go to summer school (That sucks! Get it? It’s punny! -ed).

To get a good grade, there are certain factors. You have to be fast. So jump-dash as if your life depends on it. You don’t take damage, so jump-dash so much that your fingers start to hurt. Then, there are the ever so important style points, so instead of beating everyone up, throw some in acid or let them explode with explosive barrels instead. 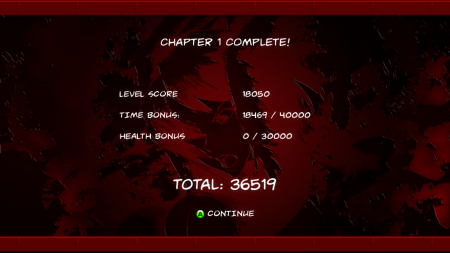 The game lacks a clear direction. I would almost call it a bunch of mini-games masquerading as a full fledged game. If it hadn’t been for a review, I would have stopped playing. Had they just stuck with one part of the game, I would have actually been quite happy. But since they decided to go with this mess, all I can say is that I am glad that it’s over.

I am 24 year old whose love for gaming started with my dad showing me games like Wolfstein 3D and Aladdin. As I grew older, so did my interest in games. I would religiously read Dutch game magazines to keep up to date. Initially. What was supposed to stay as something to pass time has grown to having a love for all things gaming related.
@RickRozenberg
Previous Black Widow and the Punisher crossover this August
Next Organic Panic Hits Steam Early Access