Blizzard has announced on their Twitter page that an updated version of Diablo 3 will be released for the Xbox One, PS4, Xbox 360, and PS3 on August 19. Along with the core game, the newest DLC, Reaper of Souls, will be bundled along with it. The X1 and PS4 editions will cost $59.99 USD, while the Xbox 360 and PS3 editions will cost $39.99 USD. 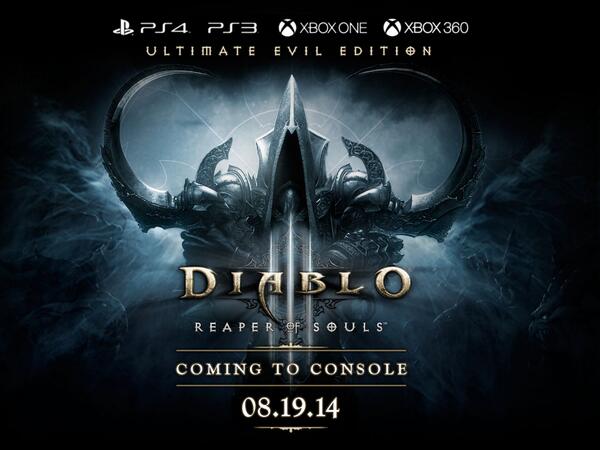 A new feature that was added is an Apprentice mode, where a low-level player can join up with a high-level player in co-op. A new in-game mail system was also added, which allows players to share their loot among those on their friends list.

Those who preorder or purchase their game on launch day will be given the Infernal Pauldrons in-game item, which may be equipped right away. This item gives bonuses to health, life regeneration, and cooldown reduction. Unfortunately, the pauldrons are not able to be transferred across platforms.

I am 24 years old. I work a full time job at a frozen pizza factory as a backup supervisor. My free time is mostly spent playing video games or playing soccer for fun during the summer. I'm really into history, especially early to mid-American history.
Previous Child of Light (Xbox One) Review
Next Constantine trailer Hell-blazes out of NBC