Get ready for a Wargame in the newest Titanfall map teased by EA and Respawn. 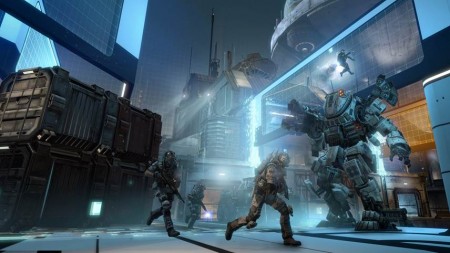 The above screen is from the Expedition map pack for the blockbuster multiplayer-only FPS from EA and developer Respawn. Entitled War Games, the map itself is set to be a parkour-centric “playground” for gamers according to Respawn Entertainment Designer Jason McCord. War Games is a kind of simulator where your team can ‘practice’ (of course, it’s not really practice). The Militia side of the map is based on Angel City, whereas the IMC will play in something like an Airbase. You can read a lot more about the new play setting on Titanfall’s official website here.

As for the rest of the maps in the pack, they’re still something of a mystery, but we’ll keep you up to date as usual when we have the news to share. Titanfall is available now for the Xbox One/360 and PC.

Jason's been knee deep in videogames since he was but a lad. Cutting his teeth on the pixely glory that was the Atari 2600, he's been hack'n'slashing and shoot'em'uping ever since. Mainly an FPS and action guy, Jason enjoys the occasional well crafted title from every genre.
@jason_tas
Previous Valiant celebrates Armor Hunters with motion trailer
Next Did comiXology just kill off a huge part of their business?