The original; and still the best? 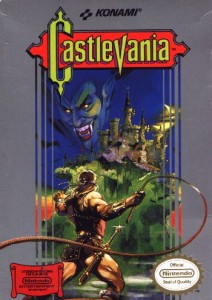 Castlevania is one of the first games I ever remember playing. It was released in 1986, a good few years before I was born, so it had been through my two brothers and sister before I was even born. I remember not being allowed to play it for quite a while because it was “too violent”; so when I finally got my hands on it, my first thought was “Wow! I must be a big kid now!”.

This was like stepping into the big leagues for me, as the most violent game I had played prior to this was probably Smash Brothers (which, let’s face it, is still pretty violent for what it is). I remember excited turning on the console, getting a grey screen, pulling out the cartridge and blowing in it, re-inserting it, and finally I saw… IT. That big ominous castle looming off in the distance, filled with all kinds of unholy terrors, from ghosts to fish-men and floating Medusa heads.

Strolling confidently through the front gates of the castle, I continued on through the entrance and into the front doors. That’s when I saw him, my first adversary, knowing what to do, I used my skills attained from years of Super Mario and jumped on the walking cadaver’s hea-wait a minute… did that just do damage? To me? “What kind of game is this?”, I asked myself. Apparently the very hard kind, because it took me a great while before I could even get past the first screen. You didn’t come here to hear me reminisce though, you came for a retro review on one the worlds greatest games! (Warning: following review may contain slightly biased opinions, viewer discretion is advised)

Castlevania was first released in 1986 in disc form on the Famicom Disc System, it was later ported over to the MSX2, and then made it home on the NES in 1987 in the USA, later made available on the same platforms in Europe in 1988.

Combat in Castlevania is difficult, but not in a bad way. Your whip takes a moment to fire up before you launch it, which in my opinion adds a bit of realism, as well as challenge. You have to strategically time when you want your strike to land and plan accordingly, making fights tougher (and if you’re anything like me, more fun).

Another fantastic thing about Castlevania is the ability to pick up and use different weapons like the throwing knife, or holy water or… the short whip. Which I’m sure we all got frustrated when we picked up. The items helped out more often than not and saved me in more than a few situations, specifically the holy water. My only complaint is that I feel like I have to go out of my way to use an item (up arrow and ‘b’ simultaniously correct me if I’m wrong, Jason).

By far (in my opinion), the best thing about Castlevania (other than Simon Belmont’s sexy swagger), is the music. Every song in the game from the second you see the castle is pure bliss. I have yet to find the main theme in the correct format, or I would undoubtedly have it as my phone’s ringtone.

I hold Castlevania very near to my heart, so near in fact, that when given the option to ‘name’ my new computer, I took the opportunity and named it Simon Belmont. Everything about the game just screams ‘Fun”! Not many games nowadays can stand up to Castlevania’s godlike power, and while the more recent Castlevania games have fallen a little flat (for an official Brutal Gamer opinion, check out Jason’s Castlevania: Lords of Shadow 2 review coming up later today as part two of this double-header), to me the first will always be the one true to my heart.

Five parts actual review, 2 parts sarcasm, 2 parts bad puns, and one part self loathing = one of my game reviews.
Previous GameStop to shift away from games, focus on phones and tablets
Next Company of Heroes 2 goes free-to-play for the weekend