Star Trek Medical Officers on the way from IDW

Publisher IDW has even more Trek goodness on the way in the form of a Medical Officers Special titled Star Trek Special: Flesh and Stone, which focuses on one of the most famous piece of Trek equipment of all time, the Tricorder. 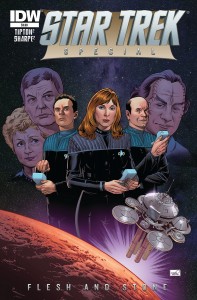 You don’t see a real life Tricorder all that often, but the XPrize competition that’s currently running is seeking to make just that- an honest to goodness Tricorder that can be used to diagnose medical conditions. Maybe an even taller proposition, the XPrize winning device must be able to do it and clock in at a costumer level price.

One place where that’s not a problem of course, is the realm of science fiction, and particularly in the Star Trek universe where they’ve been using Tricorders since the ’60s. And that’s the idea behind the new comic coming up from IDW, to show the little catch-all device in action in tales that span the Trek-verse.

“While XPRIZE is currently catalyzing a future where a Tricorder-like device is a common household item, we are thrilled to have inspired this parallel Star Trek story centered around the use of the Tricorder, further blurring the line between science fiction and reality,” said Rob Hollander, Vice President of Brand & Content for XPRIZE.

Star Trek Special: Flesh and Stone takes place at a Starfleet Medical conference. The peace of the proceedings are brought to a screeching halt though when a deadly virus is unleashed and the Emergency Medical Hologram must team with doctors Beverly Crusher (ST:TNG), Julian Bashir (ST:DS9), and Katherine Pulaski (ST:TNG) in addition to classic Trek’s Leonard McCoy and Voyager’s Dr. Phlox to find a cure. Just how are all these disparate Trek characters appearing in the same book together? That’s something that you’re gong to have to pick up a copy of the book to find out.

“There aren’t very many ‘firsts’ left in the world of Star Trek,” said Scott Tipton. “So when IDW and XPRIZE came to us with the opportunity to team up all six of Trek’s doctors for the first time, how could we say no?”

“The tricky part is how to get them together, since some of them are separated by about two hundred years,” added David Tipton. “How does it happen? You’ll just have to wait and see…”

Star Trek Special: Flesh and Stone is expected to beam onto the racks this coming July from IDW and the team of Scott and David Tipton.

Jason's been knee deep in videogames since he was but a lad. Cutting his teeth on the pixely glory that was the Atari 2600, he's been hack'n'slashing and shoot'em'uping ever since. Mainly an FPS and action guy, Jason enjoys the occasional well crafted title from every genre.
@jason_tas
Previous Tesla Effect delayed to early May and a special video look behind the scenes
Next The Masters of the Force come to Star Wars Pinball