Free Lives Games’ ode to the great big, blockbuster action heroes of yore is incredibly impressive, and a game that few should miss out on. 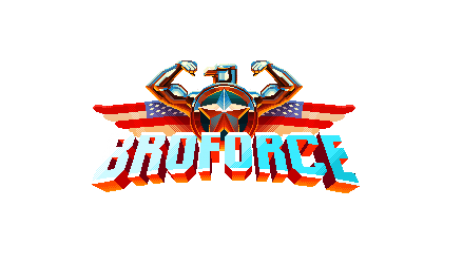 I swear no game ever wants me to give it a 10/10. While nothing is perfect though, Broforce looks like it is going to be one of the best games I have played this year. No, I’m not joking, I enjoy this game as much as Titanfall… if not slightly more.

Basically, Broforce is a 2D platformer/shoot-em-up designed to be a reminder of all of the great 80’s and 90’s action heroes and movies. The game includes a cast of famous movie characters (with slightly altered names to avoid copyright laws) such as Agent J from Men In Black, Mr. Anderson from The Matrix, The Terminator, Judge Dredd (from Judge Dredd, one of my favorite movies), Ash Williams from Evil Dead, and many, many (many) more.

Possibly one of my favorite things about Broforce so far is the fact that the closest thing the game has to a storyline is ‘shoot the guys in the terrorist masks, and then the guy in a business suit at the end’; that basically sums up the entire “story”. The main goal of the game, I assume, is just to have some fun with blowing apart terrorists into hundreds of pixelated chunks of gore. 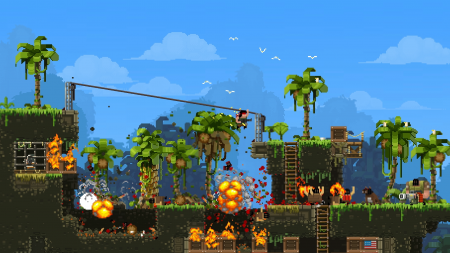 Speaking of pixelated chunks of gore; I love the graphical style of Broforce. Highly detailed 16-bit (never thought I’d hear myself say that again) graphics add an amazing sense of wonder to the game. 16-bit looks awesome all the time, but the sprites in Broforce look fantastic. The player sprites are extremely well-done too. I can, for example, tell who the MacGyver-alike sprite (yep, he’s in here too) is supposed to be at first glance.

Something I feel I need to mention before I start tearing down this positive aura I have built up, are the 99 percent destructible levels. If the game hasn’t already provided a path through a level, then you can simply shoot one through a hill. And if you are creative you can bring down whole structures by using this method; it’s an interesting way to challenge yourself and see all of the weird ways you can dispatch with enemies.

Whelp… time to start the ‘massacre’.

Even though I searched, I was never able to find a way to change the controls. Why would I want to change the controls? Because the buttons to shoot are not mapped to Left Mouse and Right Mouse like they should be, they are mapped to ‘T’ for shooting, ‘Y’ for grenades, and ‘U’ for melee attacks. You get used to it after a while, but it was hard for me to get completely comfortable with this scheme and I would have greatly preferred some customization. So, hopefully, that’s something that works its way into the final release version (and maybe some gamepad support? -ed).

Something else that bothered me was on particular boss fight. It takes place a little ways into the game and has you climbing a skyscraper whilst avoiding gunfire and bombs from terrorists- and a gigantic helicopter with a machine gun (which for some reason is shaped like a penis) attached. This may not sound too difficult (all of the casual gamers just did a double-take on that), but keep in mind that if you fall, get shot once, or blown up, it’s instant death and you have to restart the level completely over again. That was more or less the only tough time that I had with boss fights and represented a significant jump in difficulty. So perhaps some balancing might be needed there.

Now comes my biggest complaint, the the thing that almost killed the entire game for me, the thing I ranted about to anyone who would listen on my Facebook feed… You know how most games offer you a ‘confirmation request’? Like, say you found a button that said “clear unlocks” in one of the game’s menus, and say you were a dumb, overly-curious fellow like myself and thought to yourself, “surely if it does anything major, it will ask me to confirm”? Well, never take anything like that for granted again. I had unlocked what I assumed was nearly all of the characters in the game and once I pressed that button, without any confirmation/notification/feedback in any way, I started the game to find all of my unlocked characters relocked and my progress sent back to the beginning level of the game. Needless to say, I was less than pleased. 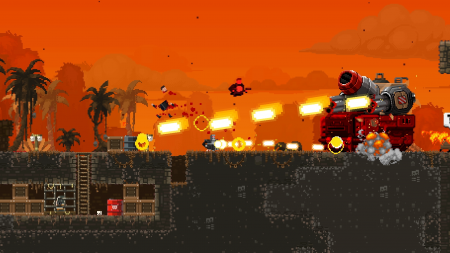 Even with that though, Broforce is an amazing game. And if the developers fix the few flaws the game has (like adding a confirmation request for example!), then I could easily see this becoming a must-own title. I will be playing it again, undoubtedly and I can’t wait for the official full-fledged version to come out.  If I was going to rate Broforce right now, I’d have to give it a high rating, maybe something in the neighborhood of 8.5. Everyone who likes classic side-scrollers, the 16bit era in general, or even just action movies should buy it.

Trust me, you won’t regret it… unless you’re as stupid as me and hit the “Delete All Progress” button.