Appearing for the first time ever in hi-def, Mario and the whole Karting crew are looking as good as ever and have some new tricks up their collective sleeve in Mario Kart 8. 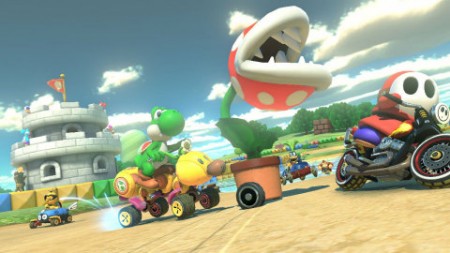 I anyone not a fan of Mario Kart? I don’t think I’ve ever met any gamer (especially not any gamer who’s old enough to remember the SNES original) who doesn’t love the series almost as much as the games that it’s based on. Mario Kart 8 might be the most exciting MK in a good long time too since there’s just so much that’s new and different about it.

While the core game is definitely the same (and there’s nothing wrong with that), there are a whole mess of new and returning characters that we haven’t seen for a while on the roster of playables. You can once again rev up as a ShyGuy for instance, and for the first time ever, get behind the wheel as all seven of Bowser’s kids- the Koopalings.

In addition, you can also play around with some new power-ups (piranha plants!) and invert gravity as you careen around the ceiling and even the walls in some levels. Once again there are remixed versions of older courses included here too, just like in the 3DS’ Mario Kart 7, as well as plenty of new ones. Personally, I’m excited about it as it’s yet another Nintendo core franchise that’s been sorely missed in the first year and change of the Wii U’s life.

Here’s a rundown of what’s new and exciting this time around the track: 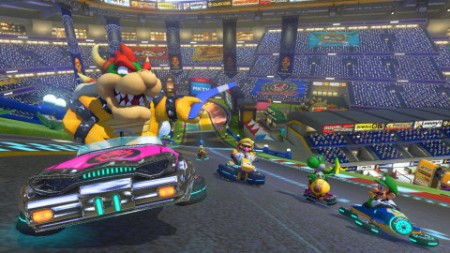 In addition to all that, MK8 will also showcase 12 player online racing and four player local play. So if it’s competition you’re in the market for, Mario’s got you covered pretty nicely. And all of this, it should be noted happens in HD for the first time ever in a Mario Kart title. That in and of itself is a ‘feature’ as the game looks like it pops off the screen if these shots are any indication. There’s tons of new detail in there that we just haven’t seen before in the series and, much like Super Mario 3D World, there’s a ‘wow’ factor that easily should make any fan smile.

As to when you ‘ll finally be able to play this one, look for Mario Kart 8 to be in stores and on the Nintendo eShop for the Wii U on May 30th… which can’t come soon enough for me.

Jason's been knee deep in videogames since he was but a lad. Cutting his teeth on the pixely glory that was the Atari 2600, he's been hack'n'slashing and shoot'em'uping ever since. Mainly an FPS and action guy, Jason enjoys the occasional well crafted title from every genre.
@jason_tas
Previous Void Expanse brings action/RPG’s into the space age
Next Dark Horse announces The Strain: The Night Eternal