The martial arts epic comes home with a Blu Ray that packs more than just a  copy of the film. 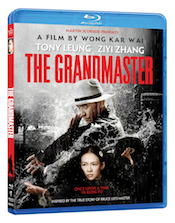 Okay so first an admission- I had not seen The Grandmaster prior to my viewing the Bly Ray sent to us by Anchor Bay, and I actually didn’t know all that much about the story contained in this epic form director Wong Kar Wai either. At first glance, The Grandmaster looks like it might be an all-out action flick, but that’s not the case. It’s also not a drama or fantasy like the famed Crouching Tiger, Hidden Dragon. In reality, it’s kind of all of the above.

The story of Bruce Lee’s teacher (that part really doesn’t occupy all that much of the narrative by the way) begins when Ip Man (not a superhero name, his actual name) takes a challenge from a Northern Chinese grandmaster who’s looking for a successor. Without spoiling too much of the story, which is really well told, Ip Man never completes his journey north as World War II breaks out.

I never realized how much the Chinese landscape was altered by the Japanese invasion of WWII, but The Grandmaster paints a picture of a land that was comfortable and abundant before being turned into a place of fear and starvation. Ip Man’s own children starved to death as a result of the famine that gripped the country and he had to leave home for Hong Kong just to make a buck to support who was left.

There are multiple story lines in The Grandmaster and all of them are good with extremely satisfying endings- some more than others though. The tale of Ip Man’s main competitor and semi-love interest Gong Er is particularly cool since she’s basically a master martial artist herself in a time when women were flat out not allowed to be involved in the study of kung fu. Actress Ziyi Zhang plays the part to perfection.

She’s cold, angry and thirsty for vengeance, but also deeply wounded from the life she’ll never have and a world that she’s not supposed to be involved with. All of that probably sounds somewhat cryptic if you haven’t seen the movie yet, but rest assured, it equals a terrific performance.

And then there’s Ip Man himself. Unlike Zhang, Tony Leung is not an action guy or a martial artist, he really doesn’t do action movies either. But watching his version of Ip Man dart around the screen, you wouldn’t guess any of that.

Leung is exceptional in the part and, thanks to his years of training for the role, is completely believable. His ability to convey thoughts and emotion without much in the way of facial expression is a perfect fit here too as the character rarely breaks out of his intense demeanor. And when he does, it’s only with a slight smile that he looks to be merely allowing himself. As I said, I’m not all that familiar with the ‘real’ Ip Man, but if he was anywhere close to Leung’s version, then he was one cool cat.

And speaking of the man himself, this wouldn’t be much of a review of a kung fu movie if I didn’t mention something about the fighting, no worries there because it’s pretty great. Existing somewhere between the brutality of more action-y films and the dreamlike state of Crouching Tiger, Hidden Dragon (sorry to keep bringing that up), The Grandmaster revels in over-the-top, yet still believable martial arts.

There are scenes in this movie where Ip Man is taking on dozens of guys at once and none of them look silly or in any way like they couldn’t have actually taken place. Maybe the coolest scene in the entire picture though is the train scene where Gong Er takes on the film’s biggest villain (naming him might spoil something for you). It’s absolutely exquisite, especially when you realize it’s all supposed to take place in a few seconds as a massive train charges thorough the station. Great stuff all around.

As far as extras go, The Grandmaster does’t disappoint here either. There are a few featurettes on the disc including a terrific documentary entitled From Ip Man to Bruce Lee and a several part series of behind the scenes videos. I loved the doc and it went a long way to shedding a little more light on the character after I had viewed the feature. Likewise, the behind the scenes videos (which are actually quite long) showed exactly how much blood, sweat, and tears (really!) went into making this incredibly difficult to put together film. From the looks of it, it was a labor of love from all involved.

I’m a pretty traditional ‘action movie’ guy when it comes to movies like this. I didn’t even really like Crouching Tiger all that much, just to give you a point of reference. All of which should probably mean that I don’t really dig The Grandmaster either, but that couldn’t be further from the truth.

The mix of drama and action that Wong Kar Wai has put together for this film is incredibly good. It’s an exercise in walking the line between genres and it does it so well that you’d swear it’s almost two different movies. That’s not to say that it’s disjointed at all by the way, because the story flows beautifully from scene to scene and through time; year (and really era) to year.

If you dig martial arts and the beauty that can be found in the ancient combat techniques, then you pretty much need to watch The Grandmaster. And if you’re a casual fan who just likes a good action flick, well, then you still need to watch this movie, or at the very least give it a try.

Jason's been knee deep in videogames since he was but a lad. Cutting his teeth on the pixely glory that was the Atari 2600, he's been hack'n'slashing and shoot'em'uping ever since. Mainly an FPS and action guy, Jason enjoys the occasional well crafted title from every genre.
@jason_tas
Previous Naughty Dog and more join Operation Supply Drop for May push
Next Thief [2014] (PC) Review