Shadowman continues to evolve as Jack Boniface’s life takes a turn for the dark(er) side. 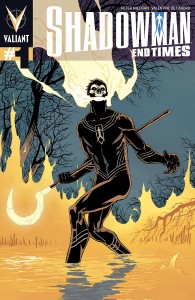 Jack Boniface thinks that he’s finally fixed his life — and the source of the dark power inside him. But when a figure from the past emerges to reveal the troubling truth about his destiny, the latest Shadowman will be forced to run a gauntlet of his darkest fears realized: the rise of a wild new pantheon of Voodoo loas… the return of his father, Josiah…and the earthly restoration of his oldest and deadliest enemy, Master Darque. Make no mistake — doom is coming for Shadowman…and the devastating consequences are about to lead Jack Boniface to a perilous new turning point!

Shadowman has easily been one of the best books on Valiant’s roster and it’s only getting better. The current arc running in the monthly, which has been transforming the Shadowman into a much darker hero, is fantastic reading and End Times sounds like it’s poised to continue that roll by pushing the character to the limits of his abilities.

“I don’t want to give too much away, but I will say that it’s unlikely if Shadowman could ever be the same again after this mini-series. As to what hope fans might have of Jack and Shadowman making it out of this adventure, I’ll quote Shelley: ‘Hope may vanish, but can die not,” Milligan told Newsarama.

“Shadowman: End Times is where we absolutely blow it up,” added editor Alejandro Arbona. “Peter has masterminded a long-term plan for Shadowman, and End Times is its beating heart and guts. Frankly, it’s like nothing I’ve ever read in superhero comics. Don’t think of it as an ending…it’s the beginning of a Shadowman we’ve never seen before.”

Get ready for an all-new Shadowman when Shadowman: End Times #1 drops onto the racks this coming April from Valiant Comics and the creative team of Peter Milligan and Valentine De Landro.

Jason's been knee deep in videogames since he was but a lad. Cutting his teeth on the pixely glory that was the Atari 2600, he's been hack'n'slashing and shoot'em'uping ever since. Mainly an FPS and action guy, Jason enjoys the occasional well crafted title from every genre.
@jason_tas
Previous New trailer details the character classes of Daedalic’s Blackguards
Next Metal Gear Rising: Revengeance (PC) Review