The classic NES Castlevania sequel hits the eShop for both the Wii U and 3DS. 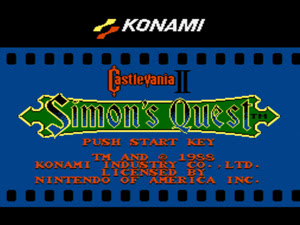 Help Simon Belmont in his gruesome quest and end his plight! In this one-player adventure you once again take on the role of Simon Belmont and duel to the death with Count Dracula. Grab your legendary whip, Vampire Killer, and roam freely through Transylvania on a quest to find the count’s missing body parts. These are the key to breaking an evil curse put upon Simon by the count. This quest won’t be easy, though, for you must battle hideous fiends who stalk the land. In addition to the intense action and tight control the Castlevania series is known for, this sequel also introduced several unique game-play elements into the fold. Build experience the longer you play, buy weapons and items from merchants, or talk with villagers to get clues (some of which are false!). Watch as day turns to night and then back again. Take a deep breath, steady your nerves, and help Simon end his curse and defeat the count once and for all

Castlevania II was easily one of my favorites of the franchise’s early days. Actually, I could probably say that about any of the releases from the series’ for either the NES or SNES. Those games were sheer gothic, platforming bliss. This particular badboy rose from its grave in 1988 and brought series staple Simon Belmont back into action as he actually tried to resurrect the vampire lord to end a curse put on him.

One of the coolest things about this one was that it actually had NPC’s that you could chat with (see above description). There wasn’t a lot of that (if any) in games like Castlevania II back in the NES days and you really had to go play a JRPG if you wanted any kind of deeper story interaction in those days.

Castlevania II: Simon’s Quest is available right now on the Wii U or the 3DS for $4.99 USD. And don’t forget that the current Castlevania timeline is set to conclude with the release of Konami’s Castlevania: Lords of Shadow 2, which’ll be arriving on the Xbox 360 and PS3 on February 25th. A little Simon’s Quest-ing might be just the thing to get you back in the vampiric groove for that one.

Jason's been knee deep in videogames since he was but a lad. Cutting his teeth on the pixely glory that was the Atari 2600, he's been hack'n'slashing and shoot'em'uping ever since. Mainly an FPS and action guy, Jason enjoys the occasional well crafted title from every genre.
@jason_tas
Previous The Raven steals onto the PSN
Next Ms. Marvel #1 (Comics) Preview