Ancient, unkillable immortal beings with lots and lots of ammo. 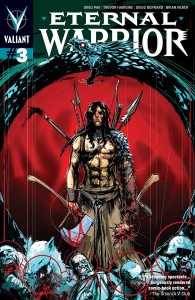 Hungry for glory as the Earth’s new Fist and Steel, the Eternal Warrior’s daughter Xaran has started a war between the mysterious Houses that rule the world. Now, as Gilad struggles to contain his daughter’s savage nature, two generations of Eternal Warrior race after the answers that lie between science and myth, rumor and legend, conquest and defeat.

Since Eternal Warrior’s first arc takes place a while before the character was introduced into the current Valiant Universe, there’s a lot happening in the book that you probably couldn’t imagine Gilad doing as the character he is now. It’s also got a really cool ‘ancient-meets-modern’ feel that is pulled off beautifully by the art team of Trevor Hairsine and Diego Bernard. That’s not to say that Greg Pak’s scripts haven’t been dynamite either- because they’ve been pretty bloody epic… and epically bloody.

Catch Eternal Warrior #3 on the stands on November 20th and see what the buzz has been about for Valiant’s hard-fighting, immortal champion.

Jason's been knee deep in videogames since he was but a lad. Cutting his teeth on the pixely glory that was the Atari 2600, he's been hack'n'slashing and shoot'em'uping ever since. Mainly an FPS and action guy, Jason enjoys the occasional well crafted title from every genre.
@jason_tas
Previous The original Wasteland returns to Steam and GOG
Next Popcap donates 100k in games to Operation Supply Drop