The young Avengers have been pushed to the brink by the madman Arcade. As the series comes to a close, fans will find out who’ll survive, who’ll not be making it back and just how Arcade will be making it out of Murder World. 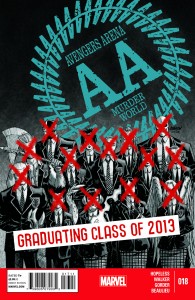 It’s all come down to this! Marvel is pleased to present your first look at Avengers Arena #18, the shocking series finale – from the award winning creative team of Dennis Hopeless & Kev Walker! Sixteen young, troubled superheroes trapped on an island, forced to fight to the death for the amusement of a mad man! Now, as the surviving teens stand battered, bruised, and bleeding – who will remain when the dust clears?! As Arcade’s master plan reaches its climax – it’s still anyone’s game! Who lives? Who dies? What will be left of the survivors when it’s over? And how will the seeds planted here bear bitter fruit in the upcoming Avengers Undercover #1? Find out this November in the jaw-dropping Avengers Arena 18!

I have to admit, I’ve never been a big fan of Arcade or Murder World. I know the character best from his classic appearances in the X-Men line of comics where he used to make all manner of hassles for Cyclops and his crew and I basically just thought he was annoying. So maybe it was a good idea to get him involved with the larger Marvel U- in specific, the Avengers. It just feel like a better fit.

Not that the little guy is tormenting the likes of Cap or Thor here (that probably wouldn’t gone all that well for him), but the young Avengers are relatively unseasoned and definitely don’t make the most of cohesive of combat units. I also have to say that I’m not all that familiar with the heroes that made up the team that was trapped on Murder World during AA’s run expect for Darkhawk. I have some fond memories of the character from his solo book in the ’90s and I’m hoping for a return to (original Darkhawk) Chris Powell at some point here since he was separated from the ‘Hawk power source in the 3rd issue of Avengers Arena. We shall see.

As for the final issue of the book itself, there are going to be some very big developments for the next generation of Marvel’s premier superhero team in this issue and it’s one that you won’t want to miss. Marvel is promising a shocker here and that’s something that they usually come through on. Personally, I’m hoping it’s the return of Darkhawk. Not that I’m holding my breath on that one.

Avengers Arena #18, the final issue, hits stands on November 27th from the creative team of Dennis Hopeless and Kev Walker with cover art from Dave Johnsom.

Jason's been knee deep in videogames since he was but a lad. Cutting his teeth on the pixely glory that was the Atari 2600, he's been hack'n'slashing and shoot'em'uping ever since. Mainly an FPS and action guy, Jason enjoys the occasional well crafted title from every genre.
@jason_tas
Previous Update- Infinity Ward teases at aliens in Call of Duty: Ghosts
Next New Pokemon X & Y toys hitting shelves now