Wax your beard. Sharpen your sword. Prepare your lungs for bellowing. Völgarr is here. 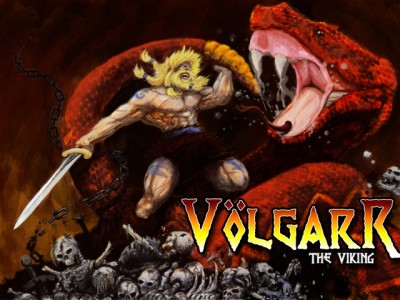 Völgarr the Viking is the result of yet another successful Kickstarter campaign. With the aim to provide the charm and challenge of classic 2D side-scrolling action games like Rastan and Super Ghosts & Goblins, developer Crazy Viking Studios raised $39,964 on an $18,000 target. They were certainly successful with the raising of funds – but how does Völgarr hold up?

If your number one question is “is it hard?”, then you’ll be pleasantly surprised. Oh, yes. It’s bloody tough, on multiple levels. Readers who grew up on the likes of Megaman and Hagane: The Final Conflict and didn’t succumb to the temptation of save states and cheat codes might have slightly less trouble than I – but there’s plenty here to keep even the most seasoned veterans on their toes.

Slayed in battle, Völgarr is resurrected by the almighty Odin, who tasks him with killing Fáfnir – a greedy dwarf transformed into a dragon by his greed who is now threatening the lives of the people of Midgard and beyond. Storytelling within the game is, well, mostly non-existent. This isn’t really a complaint – with such a simple premise set up in the game’s manual, you’re thrown right into the quest. Given how much you’ll die, it’s a relief to not have to sit through tedious cutscenes or dialogue each time.

The simplicity isn’t exclusive to the storytelling, either. A gamepad or keyboard will work just fine for controlling our hero. With fully customizable controls, it’s easy to set them up however you desire. I tested it out with keyboard, Xbox 360 controller and a Retrolink NES pad, and all worked very well on all three.  Aside from jump, attack and movement, there’s a handy-dandy zoom function which lets you see a bit more of the level. You’ll definitely want to use this to get an idea of what’s coming up and what paths are available to you. Each level has only one exit, but confident players might want to take a risk and head off the main path to acquire more treasure or equipment. 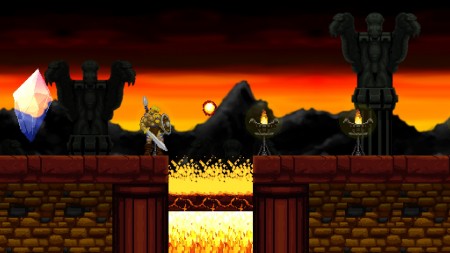 Equipment works quite similar to the SNES classic Super Ghouls ‘n Ghosts. Starting off with little more than pants and a sword, chests can be smashed open to find shields, armor and weapons to help you on your quest. Whether you’re brave enough to try and find all of them is up to you – but they’re certainly a viable choice, since each piece adds more hit-points, damage and abilities like the charged spear-throw which sends enemies flying across the screen in a bloody blur. You’ll lose one piece of equipment every time you take damage from enemies or the environment; and damage taken with no equipment results in death, which will send you back to the beginning of the level. It’s a fair, challenging system which rewards bravery in exploration and wise judgement.

Though I found it incredibly frustrating at times, the frustration was countered by a fantastic sense of satisfaction when I finally managed to beat a boss or even just cross a screen. This sense of reward is totally justified – each world is split up into two levels, with a checkpoint at the beginning of each. At first, it’s an enormous relief just to get past a group of enemies. Patience and memorization will teach you the general layout of each stage, the best paths to choose, the patterns and abilities of each enemy, etc. Once you know what’s ahead of you and how to get past it, it’s simply a matter of executing everything at the right time. On top of that, there’s a completely different set of levels depending on how much you die. I’ll leave the specifics of this up for discovery, but it practically doubles the length of the game.

Völgarr certainly looks the part, too. The hand-made pixel art does a fantastic job of making it look like it could really be a Sega Genesis game. The environments are varied and are distinct in not only their layouts, but the enemies too. Starting with the odd to the totally bizarre, you’ll face off against lizard-men with clubs, flaming gelatinous blobs, giant robotic crabs and flying poisonous bat-machines. The silliness and variety of the character designs works perfectly, and I was consistently wondering what might await in the next stage. 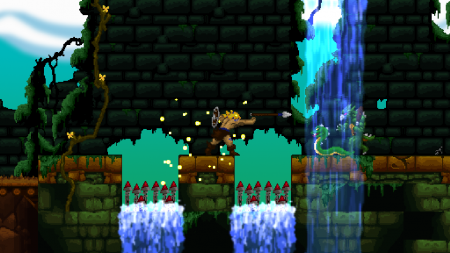 A huge orchestral score accompanies your bloody quest, and although it’s not quite the old-school electronic soundtrack you might expect, it certainly fits in with the surroundings and viking spirit. It’s exactly what you’ll need to pump you up and inspire you to soldier through the never-ending torture.

Younger players not familiar with games of its ilk might find Völgarr to be antiquated and frustrating – but if you can work with the old-school mechanics and production values, Völgarr the Viking is a deeply satisfying throwback to the arcade action classics. It’s a fair and consistent challenge that rewards patient and observant players, and those who are neither will have plenty of opportunities to learn how.

Legends foretold of a hairy-footed halfling named Kyle, who would go on a perilous quest to drive an ancient evil from the world – instead, he bought a computer and learned how to throw his opinions at the internet. He now resides in New Zealand, where he slowly wears his eyes out on far too many video games.
Previous The Skylanders are taking over Times Square for SWAPtoberfest
Next Defense Technica gives tower defense a biomechanical twist 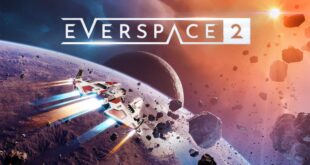 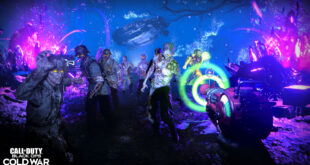 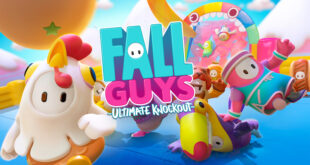