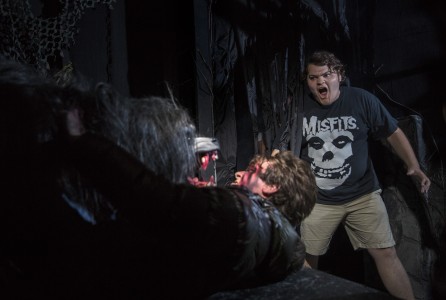 Halloween Horror Nights is always a star of an event with tons for thrill-seekers and Halloween/horror fans to see and get spooked out by, but this year’s show is truly something different with haunted attractions based on a bunch of fan-favorite and pop culture hits like Resident Evil.

The entire event is actually themed to The Walking Dead with zones depicting the ‘overrun city of Atlanta’, ‘Hershel’s barn’ and more. And in between all those walkers, you’ll have to brave all the other attractions, including:

The Walking Dead: No Safe Haven – Walk in the footsteps of the survivors as Season 3 of AMC’s horror hit relentlessly attacks you from all sides. Stay alert as walkers could trap you anywhere along your journey from the town of Woodbury to the claustrophobic confines of the derelict prison.

Resident Evil: Escape from Raccoon City – Raccoon City is overrun with Umbrella Corporation’s most terrifying experiments—and the only option is complete destruction. You’ll need to duck and dodge Lickers, Hunters, and Nemesis himself if you have any chance of escaping Capcom’s video game terrors before missiles send everything back to hell.

Evil Dead – Relive “The Most Terrifying Film You Will Ever Experience” as gruesome Deadites try to possess your soul. There is nowhere to hide as every creaking floor board and tangled vine is ready to pull you down, making you one with the Evil Dead.

The Cabin in the Woods – Experience a live recreation of the film that ripped the horror genre inside out. Beneath the cabin’s rustic appearance lies a secret facility that unleashes terrifying beings that you thought only existed in nightmares.

An American Werewolf in London – Based on the John Landis horror classic, you’ll travel to the Slaughtered Lamb, experience the gruesome wolf attack on the moors, and live the chaos of Piccadilly Circus. Beware the moon because tonight it brings only death.

Urban Legends: La Llorona – She is known as the weeping woman. To hear her mournful cries sends chills colder than the murky, watery depths she drowned her children in. Forced to eternally walk the earth, she seeks others to share her pain and suffering, now and forever.

Afterlife: Death’s Vengeance – Serial killer, Bobby “The Blade” Galletta, is about to meet Ole’ Sparky. 2000 volts are going to send him into a horrific realm of pain and suffering. His victims are bound to turn Bobby’s afterlife into an unimaginable and infernal torment.

Havoc2: Derailed – Hang on tight aboard a militaristic train convoy that is secretly transporting the “Dogs of War”—a genetically engineered super soldier outfit. These bloodthirsty maniacs are only bent on mayhem and destruction of a speeding train. This is Havoc!

Voted the best Halloween attraction in the US for the 6th straight year (!), Halloween Horror Nights 23 is going on right now at Universal Studios Orlando. Tickets and info? Get either here.

Jason's been knee deep in videogames since he was but a lad. Cutting his teeth on the pixely glory that was the Atari 2600, he's been hack'n'slashing and shoot'em'uping ever since. Mainly an FPS and action guy, Jason enjoys the occasional well crafted title from every genre.
@jason_tas
Previous Assassin’s Creed IV playable at Eurogamer Expo
Next The Wind Waker HD out now for Wii U