The iOS fighter from SNK Playmore is now available for mobile brawling on Android mobiles. 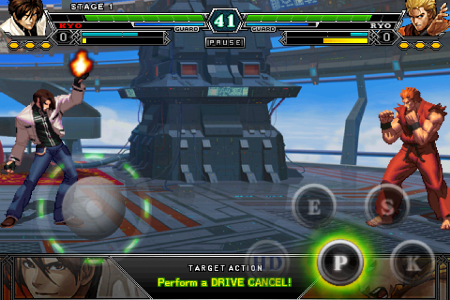 Specifically designed for mobile devices, King of Fighters-A 2012 features a virtual pad and touch-controls that most gamers-on-the-go should feel right at home with. KOFA2012 has pretty much everything you’d expect to find in a King of Fighters game too including a full range of special moves and super attacks.

Fighting games in general have found a somewhat strange bedfellow in mobile gaming. The last thing you’d expect is that a touchscreen would be capable of reproducing a fun one-on-one fighter, but there’s more than a few on both iOS and Android. King of Fighters-I 2012 (the iOS version) was actually received well when it debuted last year and there’s no reason to think that the ‘droid edition would be anything but comparable to that.

Jason's been knee deep in videogames since he was but a lad. Cutting his teeth on the pixely glory that was the Atari 2600, he's been hack'n'slashing and shoot'em'uping ever since. Mainly an FPS and action guy, Jason enjoys the occasional well crafted title from every genre.
@jason_tas
Previous Final Exam slays some monsters in new trailer
Next Dishonored GOTY on the way