Gears of War Judgement launches this coming week for the Xbox 360 and Brutal Gamer is celebrating the latest release in the epic shooter series with an epic giveaway. 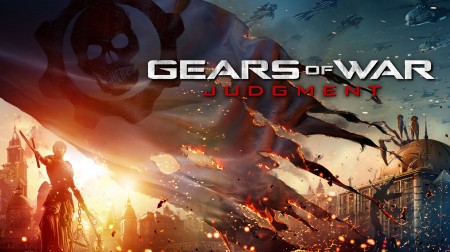 Fan favorite character Damon Baird gets his first starring role in a Gears game with Epic Games’ Gears of War Judgement. This prequel story tells the tale of what happened just after the long talked about ‘Emergence Day’. E-Day is, of course, the day that the subterranean Locust broke through the planet Sera’s surface and started their war of extermination against the human population of the planet.

Judgement is sure to be a grim tale loaded with Gears’ signature action, Lancer duels aplenty, and that famous Baird wit. To celebrate launch week for the game, Brutal Gamer will be giving away a few choice prizes to three lucky winners.

So without further delay, here’s what you can win this week soldiers:

So what do you think hotshot? You have what it takes to tweet, like, and comment your way to the good stuff? Read up- here are your official rules for entry:

How to enter – Entering a Brutal Gamer contest is easy. Just ‘like’ us and comment on this news post on Facebook, follow us on Twitter @BrutalGamer and Tweet us with the phrase ‘Brutal Gamer revs my Lancer‘, or comment on this post in the comments section (shocking!) below any time between now and the contest end date/time. You can enter as many times as you like, but only once per day per entry type (BG.com, Twitter, or Facebook, which totals a possible three entries per day). Any double entries made on the same day will be discarded (but your original entry will still stand).

Jason's been knee deep in videogames since he was but a lad. Cutting his teeth on the pixely glory that was the Atari 2600, he's been hack'n'slashing and shoot'em'uping ever since. Mainly an FPS and action guy, Jason enjoys the occasional well crafted title from every genre.
@jason_tas
Previous Castlevania: Lords of Shadow – Mirror of Fate (3DS) Review
Next New Thunder Wolves screens make with the ‘splosions