Does the latest Dead Space thread the needle and hit on both the action and horror fronts? 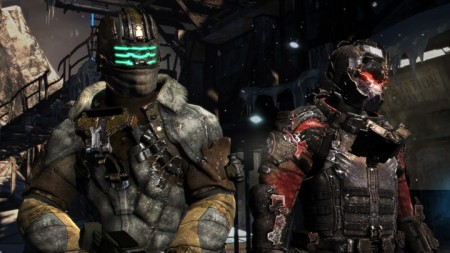 The Dead Space franchise has become a hallmark for survival-horror titles since its launch in 2008. While franchises like Silent Hill and Resident Evil decided to tread more towards the action route Dead Space dared to be different and go with survival-horror. With Dead Space 3 we now find Visceral Games and EA embracing more of an action-oriented game, Co-Op and micro-transactions. Can Dead Space 3 be an action and horror game?

Dead Space 3 picks up three years after Dead Space 2 with Isaac Clarke hitting rock bottom. Gray hairs, possible eviction and his ex-girlfriend Ellie Langford leaving him, Isaac has surely seen better days. He is soon found by John Carver and Richard Norton who state that Ellie may have found the Marker home world and needs Isaac’s help to put an end to the Necromorph threat once and for all. However, the Unitoligists lead by Jacob Danik will do everything to stop Isaac from destroying the Markers. Outnumbered, Isaac and Carver must go up against another Necromorph outbreak and the Unitoligist threat in an attempt to put an end to this infestation for good.

Dead Space stories have never been the best, but have generally been pretty good when compared to the rest of the horror genre. Dead Space 3’s story is best when it focuses on the Necromorphs and creating a suspenseful environment. In fact, Dead Space 3’s story is good most of the time thanks to substantial backstory found through audio logs, artifacts and text logs. Discover what happened aboard the destroyed ships and the colony is fascinating. Add in the continued mystery of the Marker and Necromorphs and there is definitely some interesting plot to discover.

The plot does lose traction when it comes to the humans. Dead Space worked so well due to the limited interaction between Isaac and other humans. Dead Space 2 gave Isaac a voice and more human interactions, but the personalities of the insane Nolan Stross and hostile Ellie Langford made the three-way interactions interesting. This is all gone in Dead Space 3 with the interesting personalities replaced with standard military characters that lack personality. Even the hostile and passionate Ellie Langford has been neutered down to a character that is a mere shadow of her former self. There are also a lot more cutscenes than in previous Dead Space games just to show off the lack of personality. Probably the worst offender is main antagonist Jacob Danik, a British man who loves to hear himself speak. In past games, the main antagonist did a pretty good job of staying out of the way and letting the Necromorphs feel like the real bad guys, but Danik loves to show off. This wouldn’t usually be a problem, but like many of the other characters he lacks personality and quickly becomes more of an annoyance than a threat.

One of the most hyped about features by EA is the fact that the story can change when in Co-Op. Sadly, what sounded great on paper didn’t execute well in the game. There are only a few scenes where anything changes and a few Co-Op missions that don’t add much to the story. The idea of John Carver having Marker-influenced dementia is great for example, but it rarely manifests in the actual game.

Dead Space 3 can have an interesting story at times though and the narrative  is continuously saved thanks to its rich backstory. However, next time they should limit the human interactions and look for personalities more akin to those found in Dead Space and Dead Space 2 rather than keep the generic NPC’s found here. And I have to believe that there will be a next time and that Dead Space 3 will most likely not be the end of the franchise. With so much mystery left and the ending left wide open we should expect another title in the coming years.

Despite the story’s faults this is still a Dead Space game through to the core with just a few changes made to the formula. Players will still enjoy shooting unique weapons while fending off waves of pursuing Necromorphs.

Gameplay remains consistently Dead Space too. Players aim, shoot, run, reload and perform all the same actions like in any other Dead Space game. Stasis and Kinesis return once again to slow down enemies and chuck body parts back as makeshift weapons. New puzzle elements have been added that involve using both, but they are all simple and don’t detract. Strategic dismemberment is still quite fun after three games.

Some new elements have been added to the gameplay. Isaac can now roll to avoid attacks by double tapping LB/L2. This is a great addition to the combat, which continues to have Isaac and Carver control like cinderblocks. The other less notable addition is the new cover mechanic, which accompanies one of the worst parts of the game; fighting human enemies. Dead Space’s slow gameplay never meshes well with fighting human enemies and these sections just end up being a nuisance in the way of cutting limbs off Necromorphs. Other nuisances include new rappelling sections that will test anyone’s patience due to some finicky hit detection.

Do not expect to get scared like in the previous games. Dead Space 3 is most definitely an action title with only a few moments of trying to be a horror game. The first few chapters set Isaac on ships similar to the Ishimura with plenty of hiding places for Necromorphs and tight corridors. These levels soon make way for very open arenas with Necromoprhs that pop out of the snow. You might jump at first, but it soon becomes routine.

The level design also strongly conflicts with the Co-Op. Earlier levels are very closed and claustrophobic making two players a bit harder, especially since it’s easy for your ally to block your shot. However, later levels it’s much easier with that open space. It is really a double-edged sword as in parts Co-Op can be very frustrating, but in others it can be good fun.

Dead Space 3’s new gameplay additions don’t do the game a whole lot of good, but there is one addition that is just pure awesome. Dead Space 3 does away with pre-built weapons in favor of complete customization. Players will pick up parts that can then be used to construct brand new weapons including upgrades. Those who don’t want to construct their own weapons can still choose from a list of blueprints.

Dead Space 3 is still incredibly fun to play thanks to the award-winning dismemberment invented in the original. The game does bring some new gameplay ideas to the table, but aside from the weapon customization they really aren’t that good. Still, come for the Necromorphs and ignore the humans.

One can’t deny that EA games always look great. Their presentations are usually fantastic when stacked up against other third party titles. Dead Space 3 is no exception with only a few issues concerning its presentation. It’s really fantastic looking with some great modeling and texture work throughout. Detail on the main character is spot-on, but the different suits with all their different details are just simply amazing. Likewise, the environments are richly detailed with plenty of bloodstains and atmospheric lighting.

Much applause has to go out towards the snow effects and physics too. Visceral Games has done an outstanding job creating realistic snow. In fact, I haven’t seen snow look and react this realistically since Uncharted 2: Among Thieves back in 2009. What isn’t so great about the presentation is the voice-work and script though.

The script can best be defined as cheesy and cliché. Isaac and Ellie put in some good performances, but the rest of the actors are completely clichéd. The scientists have British accents, the soldiers are redneck and the antagonist is British. It’s a shame to see so many clichés. Again, Dead Space 3 looks absolutely fantastic- it’s just a bit disappointing not as much time went into the voice work and scriptwriting.

Dead Space 3 is not a horror title, but an action one. The story is definitely not the strongest either thanks to a large use of clichés and a pretty weak script. There’s still plenty to love though and the potential for a Dead Space 4 after the events of the game is huge.

Those who approach the game as an action title will find an exciting game worth investing some time in.

Jason's been knee deep in videogames since he was but a lad. Cutting his teeth on the pixely glory that was the Atari 2600, he's been hack'n'slashing and shoot'em'uping ever since. Mainly an FPS and action guy, Jason enjoys the occasional well crafted title from every genre.
@jason_tas
Previous Preview: Harbinger Wars #1
Next inXile’s Torment rolls on with Kickstarter campaign