Rambo The Video Game puts the stress on authenticity

Reef Entertainment is putting a heavy dose of film accuracy into its forthcoming Rambo game. Not only will the action title look like the movies, but it’ll sound like them too. 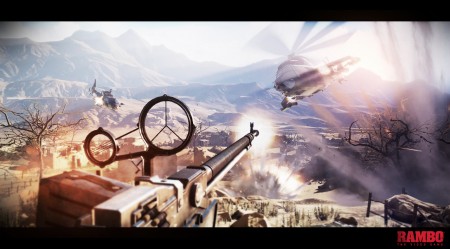 The publisher has gone one step beyond and tapped the vaults to secure the original recordings of both Sylvester Stallone (Rambo himself) and the late Richard Crenna who played Col. Sam Trautman in the films.

Said a representative of Reef:

“Our goal is to produce the finest Rambo video game ever made. To do that, we are including dialogue, special effects, and music from the movies.

STUDIOCANAL, the owners of the Rambo films, searched their extensive archives and tracked down audio reels containing the original voice recording tapes for FIRST BLOOD, FIRST BLOOD PART II & RAMBO III. These tapes provided us with the pristine vocal performances of Stallone and Crenna that we have included in the game.”

I can’t imagine that it’d be overly difficult to make “the finest Rambo video game ever made” considering that the character hasn’t had all that many outings in the gaming world. And as for the ones that are on the history books, well lets just say that they weren’t of the ‘top shelf’ variety.

Still, I have to admit that the inclusion of Stallone and especially Crenna is impressive. And Rambo The Video Game actually is looking pretty great too from the just released pair of screens. I’ll keep this one in the ‘keep an eye on it’ file with a healthy dose of conservative optimism.

Jason's been knee deep in videogames since he was but a lad. Cutting his teeth on the pixely glory that was the Atari 2600, he's been hack'n'slashing and shoot'em'uping ever since. Mainly an FPS and action guy, Jason enjoys the occasional well crafted title from every genre.
@jason_tas
Previous Sniper Elite: Nazi Zombie Army Review (PC)
Next New Witcher 3 screens look very next gen