Fuse gets lit with pre-order goodies

Light the pre-order spark for Fuse with some illuminating incentives. 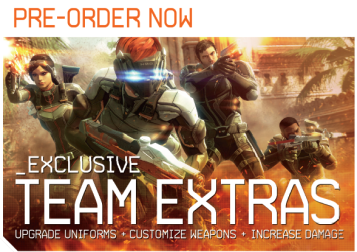 Starting now, EA and Insomniac are offering a selection of special armor and weapon unlocks for the game.  And in addition to those, players who pre-order the four player co-op action title will also be able to boost their damage dealt with one-handed firearms thanks to the Quickdraw Team Perk.

Here’s what’s in the pre-order pack:

Even though pre-orders are open, there’s actually no firm release date as of yet for Fuse. As of now though, it’s scheduled to storm retail in Spring of next year for the Xbox 360 and PS3.

Jason's been knee deep in videogames since he was but a lad. Cutting his teeth on the pixely glory that was the Atari 2600, he's been hack'n'slashing and shoot'em'uping ever since. Mainly an FPS and action guy, Jason enjoys the occasional well crafted title from every genre.
@jason_tas
Previous Sam B of Dead Island Fame “releases” new music video
Next Grand Theft Auto: Vice City Yanked from Steam