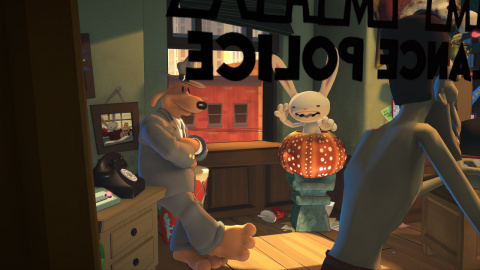 A light week for big name new releases nonetheless brings a few possible gems to Switch with Sam & Max, Beyond a Steel Sky, and Danganronpa.

Yes, it’s December, and as such the big names are few and far between. Well, they are on Nintendo’s platform anyway, as there’s a certain green-armored soldier who’s set to return this month.

That doesn’t mean that there’s nothing new to play though. This week brings a few notables to the Switch, including the above mentioned, plus Nintendo’s headlining title of the week, Big Brain Academy.

That’s a multiplayer “party game” that pits players against each other in a battle of mental acuity. Could be a fun time. Personally though, my pick of the week would be Sam & Max: Beyond Time and Space.

It might not have the same magic as the Lucasarts Sam & Max of yesteryear, but it does look like a fun time. And of course, it seems pretty funny too. That’s pretty important when you’re talking about a game starring the freelance police.

Jason's been knee deep in videogames since he was but a lad. Cutting his teeth on the pixely glory that was the Atari 2600, he's been hack'n'slashing and shoot'em'uping ever since. Mainly an FPS and action guy, Jason enjoys the occasional well crafted title from every genre.
@jason_tas
Previous Snake-Eyes: Deadgame gets collected this month, and a deluxe one-shot
Next The Dark Knight comes to Hot Wheels Unleashed in new DLC