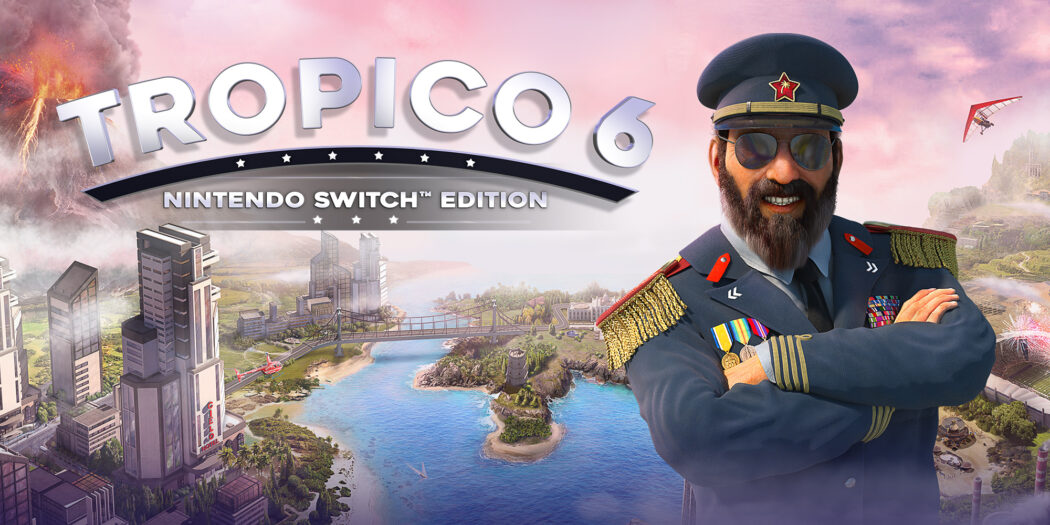 The long-running Caribbean island dictator simulator Tropico has arrived on the Switch with Tropico 6. Admittedly, I didn’t play the PC version of the game, but being El Presidenté is as satisfying as I have ever found it in this iteration.

Tropico 6 is a city-builder. The catch this time is that instead of building a single city, you’re responsible for the well being of an entire island nation. Also, instead of being an all-powerful figure, you’re an elected official who can be voted out during any election cycle. If that happens, it’s game over.

I really like the way Tropico handles this. There is a real incentive to keeping your people happy, and failing that, there are only so many crooked means you can take to rig the election. The game and its scenarios take place throughout several different era, with each bringing their own challenges. For instance, in the colonial era, the player is not the leader of the island by election, but by mandate from the crown. In this era, it is important to keep fulfilling their demands to extend your mandate.

There is a lot of nuance in the way the game handles this, and honestly, there is more depth than a novice will know what to do with. Luckily, the tutorial is comprehensive and especially helpful for new players. The early scenarios also offer players extended chances to learn the game’s mechanics in an immersive setting.

I am happy to report that Tropico 6, like 5 on other consoles, works well on the Switch. Whenever these complex management games come to console, there is a definite concern that the control scheme just wont translate well. It does so with no major problems here.

Even for series veterans, I recommend playing through the tutorial’s first chapter to get an idea about how the game, its cameras and menus control. Building wheels are toggled with the left trigger, camera shifts can be toggled with the right, and so on. It isn’t as good as a keyboard and mouse, but it definitely gets the job done.

There are a few pieces of the experience that hindered my overall enjoyment. I understand that a lot ius going on on any map in Tropico, but the loading screens really last for awhile. Luckily, these are only necessary when loading a game or starting a new map, so you don’t see them that often. There are also some performance hiccups and frame drops, and, once in a while, I had a tough time placing a building because there was some lag. I think I should also say that I am typically not phased by lag or dropped frames, so it could be a deal breaker for some.

As for the actual management gameplay, everything works very well. There is a lot of room to run the game in an automated fashion, or you can get down in the nitty gritty and micromanage every building and person. I take the middle approach and will typically manage groups of buildings. This is still an approach that Tropico recognizes and rewards.

There are many nuances to Tropico 6’s gameplay, but I say confidently that they all work in favor of the island management sim. I did not run into any problems that made me question the game design or game logic.

Sights and Sounds of the Caribbean

The presentation and performance of Tropico 6 is really a double edged sword for me. On one hand, I enjoyed the music and sound design greatly. The music never wears out its welcome and the voice acting is a lot of fun, if a bit silly.

The visual presentation is a little more rough. Even for a Switch game, I was taken aback by some of the visuals, such as the closeup of El Presidenté during the customization screen. For the most part, the game looks nice, as long as you don’t zoom in too close.

Basically, and this goes for plenty of Switch games, it’s fine as long as you don’t look too closely.

Tropico 6 is almost surely a better experience on the computer. The slight lag, long load times and ugly up close visuals aren’t the biggest selling points. However, a computer doesn’t let you take the game anywhere you want. If you’re a big Tropico fan and you can forgive these issues, Tropico 6: Switch Edition is a must-buy.

Erich was introduced to gaming by his grandfather before he could walk. Since then, he has grown up loving Nintendo and most games in general. He couples his love of videogames with journalism to cover news, provide reviews and tell it how it is in the gaming world.
Previous Trailer: Douse a raging inferno in Firefighting Simulator – The Squad
Next Trailer: Bee Simulator buzzes onto PC