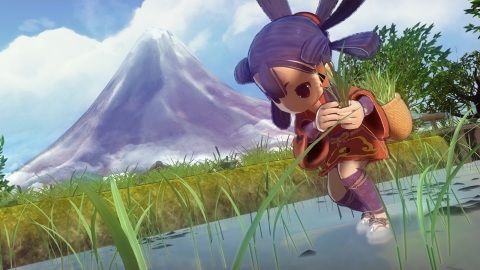 Coming off of a big week for Switch gamers, the Nintendo Download is a little smaller in scale, though some possible gems shine through.

Harness the power… of rice

An interesting week this coming week, to be sure for Switch gamers. The Nintendo console has a bunch of smaller releases, as well as a couple of larger ones, including the Switch debut of Tropico.

But sims about building your own tropical dictatorship aside, this week’s headline title is Sakuna: Of Rice and Ruin. And if you think that sounds weird, it kind of is. In Sakuna, you play as the daughter of two gods, who finds herself a mortal and stranded on Earth.

Sakuna (that’s her name) must battle monsters with her ragtag group of followers, and raise rice. You see, that’s the source of her power. I guess that makes sense, since carbs and all.

As mentioned though, there’s a bunch of smaller stuff this week. So if none of the above floats your boat, maybe something else here will. Scroll down for the full listing.

* NO PURCHASE NECESSARY. Void where prohibited. Open to legal residents of the United States and Canada (excluding Quebec). Sweepstakes begins 10:00AM PT on 09/30/2020 and ends at 11:59PM PT on 11/10/2020. To enter, you must (1) have a Nintendo Account (if you do not have a Nintendo Account you can register for one at https://my.nintendo.com; (2) visit https://my.nintendo.com/reward_categories/sweepstake; (3) sign in to your Nintendo Account, and (4) redeem 10 Platinum Points per entry at the My Nintendo Animal Crossing: New Horizons Fall sweepstakes page (https://my.nintendo.com/rewards/5393dfe1900c5e64) as stated in Official Rules. Ten (10) winners will each receive one (1) Future Press Animal Crossing: New Horizon Companion Guide, one (1) Enhanced Wired Controller for Nintendo Switch – Animal Crossing, one (1) Protection Case for Nintendo Switch or Nintendo Switch Lite system – Animal Crossing, one (1) Penny Arcade Animal Crossing: New Horizons Pin set and one (1) Nintendo Store exclusive Tom Nook Hawaiian shirt (ARV $149.92 each). Total ARV of all prizing $1,499.20. Odds of winning depend on number of eligible entries received. Details and restrictions apply. For Official Rules, visit: https://www.nintendo.com/rules/mynintendo-AnimalCrossing-NewHorizons-Fall-sweepstakes/ Sponsor: Nintendo of America Inc., 4600 150th Avenue NE, Redmond, WA 98052.

Jason's been knee deep in videogames since he was but a lad. Cutting his teeth on the pixely glory that was the Atari 2600, he's been hack'n'slashing and shoot'em'uping ever since. Mainly an FPS and action guy, Jason enjoys the occasional well crafted title from every genre.
@jason_tas
Previous Ghostrunner speeds onto Nintendo Switch on the 10th
Next Trailer: Codemasters shows off Dirt 5 running on PS5