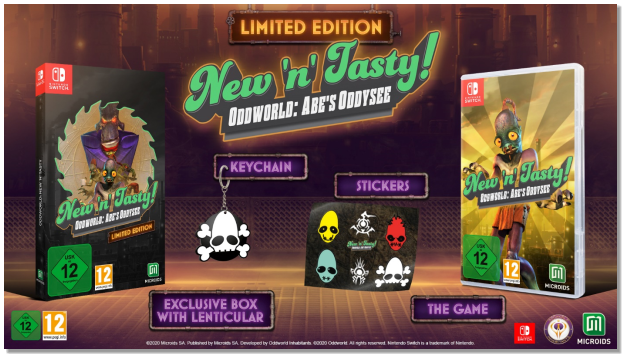 The reinvigorated world of Oddworld: New and Tasty finally has a launch date on the Nintendo Switch, and is coming up in just a few months.

One of the more highly regarded series’ in video gaming, Oddworld has been in the news quite a bit lately. With the latest release coming up, expect a lot more of that, especially since it’s hitting retail sooner than later.

Oddworld Inhabitants has announced that, co-developed with Microids, the Switch edition of the game will be arriving in grand form too. The physical edition will come in two flavors, both standard and limited. The limited will include much more than just the game too. You’ll also get a keychain, stickers, and a neat little lenticular box.

Interesting to note however, is that there’s a European tag on the box. I’m not sure if that means that this physical edition will be restricted to that territory only, but it’s worth pointing out that it doesn’t specify that anywhere in the press release.

In any event, here’s a look at the game in action:

The physical standard and limited editions of New ‘n’ Tasty are available at retailers for pre-order beginning today. The action begins with our hero Abe serving as a simple floor-waxer at RuptureFarms before stumbling into a meeting and overhearing his boss, Molluck the Glukkon, discuss future plans to turn Abe and his fellow Mudokons into Tasty Treats as a final effort to rescue Molluck’s failing meatpacking empire.

Jason's been knee deep in videogames since he was but a lad. Cutting his teeth on the pixely glory that was the Atari 2600, he's been hack'n'slashing and shoot'em'uping ever since. Mainly an FPS and action guy, Jason enjoys the occasional well crafted title from every genre.
@jason_tas
Previous Behold a trio of new looks at Cyberpunk 2077’s gameplay
Next Amazon rebrands gaming offerings, launches Prime Gaming