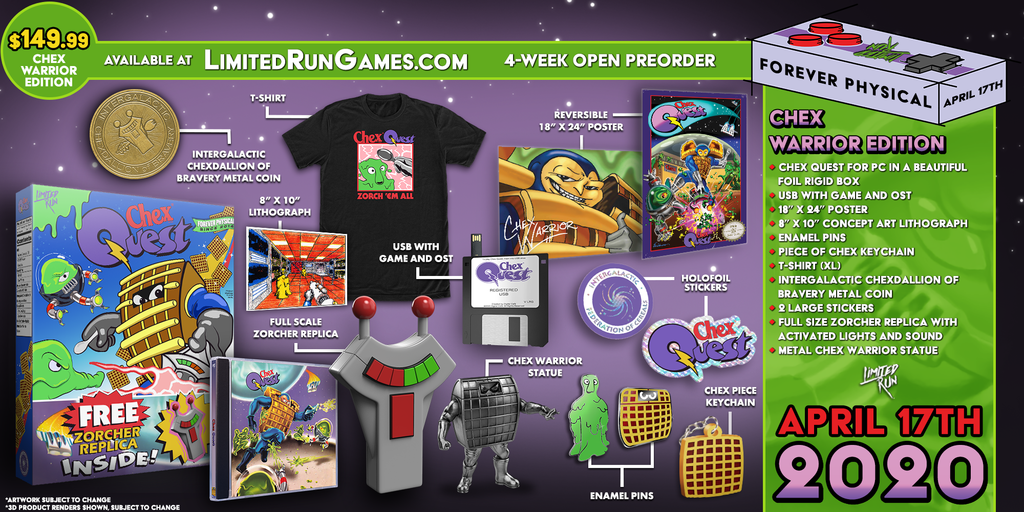 While it’s only two games, Limited Run Games has quite a selection this Friday. On the one hand, you’ve got Jedi Knight. On the other, Chex Quest.

I’m pretty sure, out of all the games that LRG could have announced, Chex Quest was probably one that you wouldn’t have guessed was coming up. After all, it’s just about as niche as you can get.

Hailing from the cereal of the same name (half the name anyway), Chex Quest first arrived way back in 1996. An FPS, the game was a total conversion (look that up) of Doom. Of course, unlike Doom, CQ was pretty non-violent.

You played as the Chex Warrior, essentially wearing a giant Chex piece as armor. His mission was to rescue colonists from a race of evil alien baddies. As mentioned though, don’t expect blood and guts, as CQ was and remains fairly non-violent.

Now the game is coming back for the PC, complete with a gorgeous collector’s edition that’s loaded with goodies. Both flavors of the game, plus a special soundtrack, will go on sale this Friday, April 17th at 10am eastern.

If you do want the CE, you might want to order sooner than later though. It really is an impressive pack.

Oh yeah, and Star Wars too

While Chex Quest is the highlight, there’s another game coming up this week too from LRG. This one probably has a little bit bigger of an audience too, as it’s none other than Star Wars Jedi Knight: Jedi Academy.

The famed PC and console title is back, and coming to Limited Run with Switch, PC, and PS4 editions. And yes, like with Chex Quest, that includes some incredible looking Collector’s Editions. Well, at least it does if you’re looking for a console version.

Though honestly, those blister carded PC editions are pretty slick too.

These kinds of releases sell out like lightning too, so as with Chex Quest’s CE, try and get there early to get yours if you want one.

Jason's been knee deep in videogames since he was but a lad. Cutting his teeth on the pixely glory that was the Atari 2600, he's been hack'n'slashing and shoot'em'uping ever since. Mainly an FPS and action guy, Jason enjoys the occasional well crafted title from every genre.
@jason_tas
Previous Journey to the Savage Planet gets some Hot Garbage
Next Mondo intro’s Batman: The Animated Series posters and Catwoman figure