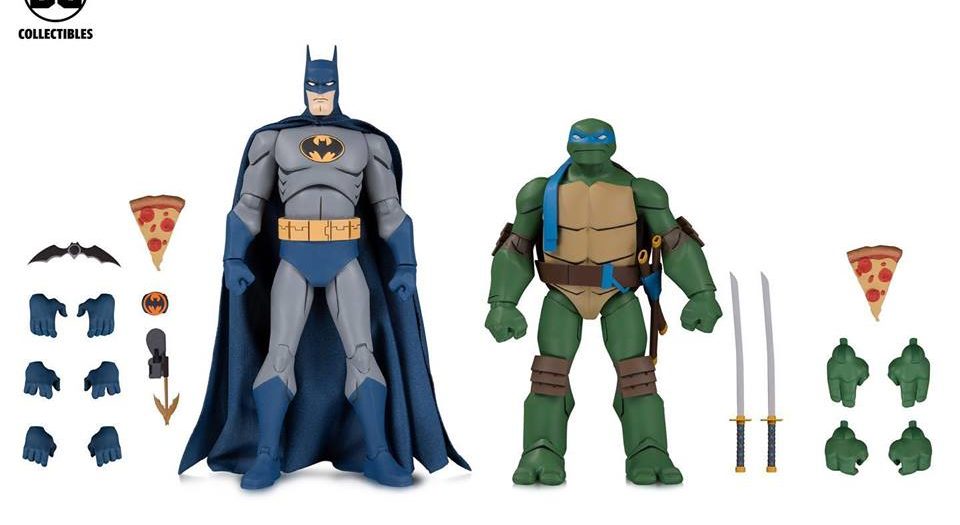 Remember that one-off Mikey figure wearing the cape and cowl? Well, surprise; there’s a whole line of Batman vs Ninja Turtles figures on the way.

Batman meeting the Teenage Mutant Ninja Turtles is nothing new really. The set of comic book mini-series’ is entering it’s third volume, they’ve met in a video game (Injustice 2), and now star in a combined animated movie. The properties just seem to work, and play off of one another, shockingly well.

And now there is definitely something new on the way. DC Collectibles today announced that a series of Batman vs Teenage Mutant Ninja Turtles action figures is coming.

From DC Collectibles, the series will include a total of five two-packs. Each one will contain one DC Comics, Batman-themed, character and one TMNT-themed character. All done in the animated style of the movie (that means blue and grey Batman!), the sets will be loaded with accessories, and be exclusive to GameStop.

Presumably the exclusivity is how DC is getting around the Playmates Toys licensing issues. That’s the same route that NECA has taken with its Turtles figures, and it seems a viable one.

Watch for these to arrive this December, with a price tag of $49.99 USD each. They’re up for pre-order at GameStop right now, including an ‘all-in’ bundle that you can grab if you want all of them.

Jason's been knee deep in videogames since he was but a lad. Cutting his teeth on the pixely glory that was the Atari 2600, he's been hack'n'slashing and shoot'em'uping ever since. Mainly an FPS and action guy, Jason enjoys the occasional well crafted title from every genre.
@jason_tas
Previous SDCC 19: DC Comics and AT&T present the Batman Experience
Next Cuphead animated show coming to Netflix