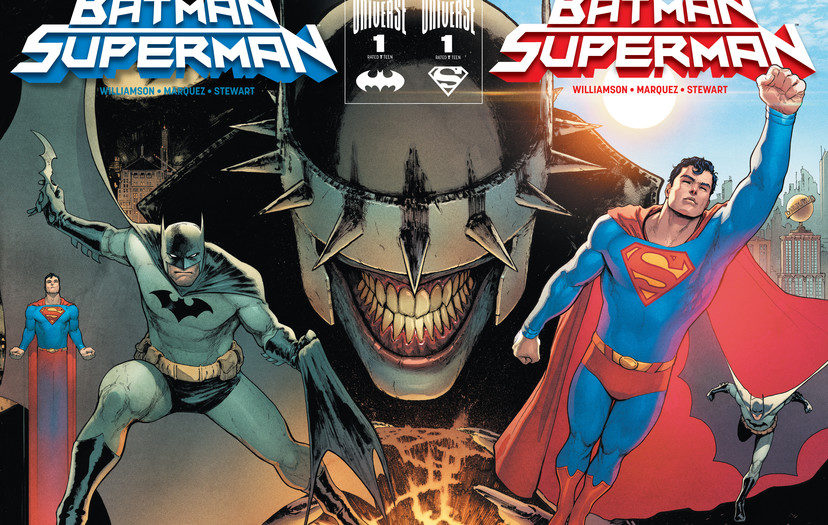 The second run of DC Comics’ Batman/Superman kicks off with a bang. Picking up where The Batman Who Laughs left off, things are getting dark.

The DC Comics event series Metal opened the floodgates of a new brand of evil for the universe. The Dark Multiverse was unsealed in Metal, and it held things that were dark, unnatural, and never meant to be. One of the worst of the worst things to emerge from it is The Batman Who Laughs.

When an alternate universe’s Batman killed Joker, that Dark knight was infected with a Joker-toxin unlike any other. It transformed Batman into a new Mr.J. Now as evil as you can imagine, Bruce murdered the entire Bat-family and became a demonic, wicked version of his former self.

He served as one of the main baddies in Metal, and was the only alternate-Batman to escape the conclusion of that series. He then seeped back out of the floorboards to plague DC’s heroes in The Batman Who Laughs mini-series that just concluded, and now continues his reign of terror in Batman/Superman #1. And what a reign it is.

This book has taken a very dark turn indeed, and an ominous one too from the preview below. Check out what Superman and Batman will be faced with once Batman/Superman #1 hits stands this August the 14th.

Jason's been knee deep in videogames since he was but a lad. Cutting his teeth on the pixely glory that was the Atari 2600, he's been hack'n'slashing and shoot'em'uping ever since. Mainly an FPS and action guy, Jason enjoys the occasional well crafted title from every genre.
@jason_tas
Previous Crash Team Racing revs up for launch today
Next Warhammer Chaosbane (PC) Review