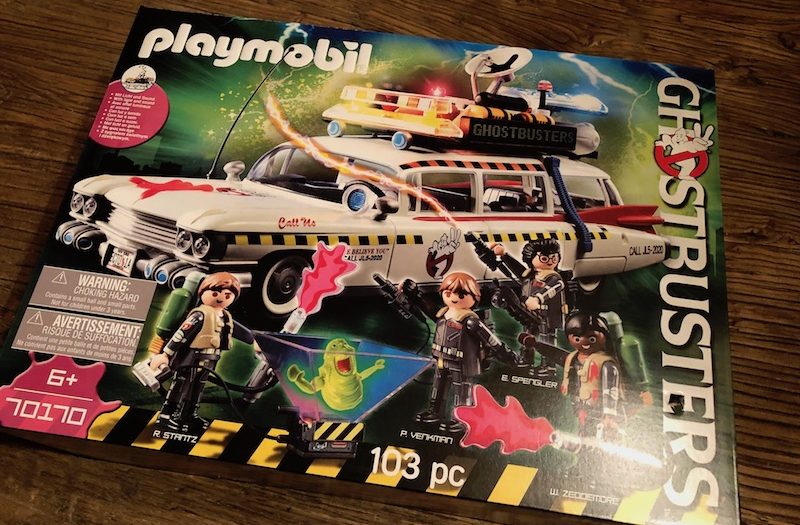 Celebrating 35 years, Ghostbusters is red hot right now. Playmobil has a little extra in store too, in the form of an awesome Ecto 1A set.

Busting for 3 and a half decades

Time does weird things to your memory. Ghostbusters has been around for nearly four decades, and yet in some ways it still seems like it’s a relatively new property. Well, it does to me anyway.

Of course, it isn’t. The original film opened up today (June 8th) all the way back in the year 1984. When you consider that, it’s hard to think of Ghostbusters as anything other than one of the biggest and most long-lived pop culture phenomenons.

This 35th year of the franchise is seeing a convention, the announcement of a new “Ghostbusters 3” movie and remastered video game, plenty of comics, and of course toys. Not only did the DST series wrap up, but Playmobil announced several more collector sets.

These follow up on the first few waves that’ve hit over the past two years. Oddly enough, they focus on the Ghostbusters II timeframe instead of that original film.

Then again, maybe that’s fortunate, because the first set that we’ve gotten a look at here at BG is not only of a vehicle that’s rare to find in toy form, but it’s pretty great too.

So let’s take a look at the Ghostbusters’ sequel-ride, Ecto 1A.

Playmobil sets, being what they are, are actually pretty sturdy. These are mainly made with kids in mind after all. Ecto 1A is no different, though it does feature a few touchy moments in its construction, and loads of small parts.

Bottom line, this isn’t for very small children, and if you have an older child that’ll be playing with it, you’ll need to be very involved in the build. That’s mainly because there are some stickers that need applying to make Ecto 1A really pop.

There’s also a light and sound feature. I’d imagine that’s something that you don’t want played with too roughly. Just something to keep in mind if you’re figuring on buying this as a gift and not for your own shelf.

Other than that though, it’s an easy build that should go pretty fast. The four figures are already assembled right from the baggies. All you will have to do is to put their proton packs and slime-blowers together.

All are very sturdy, right in line with the rest of Playmobil’s lineup.

It might sound redundant to say that this looks like a Playmobil set, since it’s… a Playmobil set. It’s still worth saying though, because the company’s figures have a unique look to them, much like LEGO mini-figures. And they don’t deviate much from that.

Though the four Ghostbusters all have minor differences in their expressions, but they all still look like staple Playmobil figures. I have to add however, that they look fantastic in their dark grey suits, complete with GBII logo’s on the arms.

The actual Ecto 1A though, is the exact opposite of that. The car is flat-out gorgeous. It’s a slightly cartoony version of the movie vehicle, and features pretty much everything that that famed car did.

It has a radar dish, plenty of seating for the whole crew and equipment, sirens, pile of mysterious equipment on the roof, and more. It even has a pair of lenticular stickers to replicate the digital signage mounted on either side in the movie.

This is seriously cool stuff. Even if you’re not a Playmobil fan of any sort, I’d still recommend taking a lot at this set, even if it’s just for the car. It’s that great looking.

I think it’s probably safe to consider almost everything other than Ecto itself an “extra” in this set. And if that’s the case, then Playmobil has outdone themselves.

You get all four Ghostbusters in the box, two slime-blowers, two proton packs, a ghost trap, and special effects. Ecto 1A includes one silicone (?) pink slime splotch. This is a constant within the line, and you can apply it almost anywhere you like on the car. The slime-spot sticks on by itself, and is semi-translucent.

Oddly enough though, there are no proton streams included. I would have liked to have seen that, since you get two slime… plumes for the blowers. So it would have completed the look nicely if you’re making a shelf diorama with the trap.

Speaking of, the trap interacts with an app. Setting your phone under it, you can mimic a ghost being sucked into the device. It takes a lot of darkness to make it happen effectively, but it’s a pretty cool, interactive effect.

I’ll finish this section off with a mention of something that I love to see in any vehicle or playset – everything fits inside. Venkman, Spengler, Zeddemore, and Stanz all fit snugly in the car, along with all that gear I mentioned. There’s just something about that that’s great.

I love this set. I don’t have many of the Ghostbusters Playmobile sets, but this one is a very happy addition to my GB shelf. The Ghostbusters figures themselves (and accessories) are great by themselves, but Ecto 1A is incredible.

I have no hesitation at all recommending this one to hardcore fans, even if it’s just for the car.

Oh, one thing to note though – the set does not include Slimer. Yes, he’s on the box, but that’s just ti illustrate what the trap/App combo can do. There’s no actual Slimer figure in the box.

As Ghostbusters collectibles go, Playmobil has cooked up a winner here with the Ecto 1A. The sequel version of the famed car is rarely seen, and looks incredible here, complete with lights and sounds. The figures and accessories are almost just bonus items. Cool bonus items, but still.

Jason's been knee deep in videogames since he was but a lad. Cutting his teeth on the pixely glory that was the Atari 2600, he's been hack'n'slashing and shoot'em'uping ever since. Mainly an FPS and action guy, Jason enjoys the occasional well crafted title from every genre.
@jason_tas
Previous Destroy All Humans! Remake Taking Over in 2020
Next E3 2019: Check out almost 14 minutes of Star Wars Jedi: Fallen Order