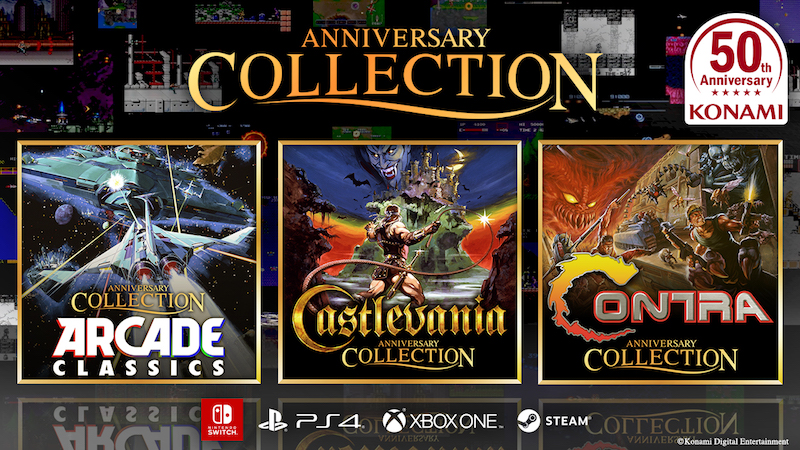 Anniversary Collections for Contra, Castlevania, and the company’s arcade classics will hit consoles and the PC to celebrate Konami’s 50th birthday.

Whatever you think of some of the things that Konami has done lately, its still very much an icon of the video game industry. Sure, the modern age hasn’t been all that great for the company’s properties, but who can argue about classics like Contra, Castlevania, and Gradius? Nobody, that’s who.

And on that note, a total of 3 sets of games are coming up. Leading off will be the Arcade Classics Anniversary Collection. Expect to see it on April 18th.

If the console classics are more your speed, you’ll also be happy to know that you won’t have to wait too much longer for some all-time greats from the Contra and Castlevania series’. Both of those collections will stock 8 games a piece too, so they’ll be pretty deep.

Be that as it may, as of now only the first four titles for each collection have been announced. And that leaves some guessing for long time fans. Though, honestly, there are probably a few gimme’s when you consider the slate that’s not been named.

Personally, I’d figure on Hard Corps on the Contra side, and Castlevania 3 and Symphony of the Night on the Castlevania side all being probable locks. Though again, I’m just guessing.

Added info that we actually do know is that the sets will cost $20 USD each, and come complete with digital booklets that will go behind the scenes on the included games.

As mentioned, the Contra and Castlevania Collections will arrive a little after the Arcade set. Look for them both some time this summer. Expect all of them to land on the Switch, Xbox One, PS4, and PC.

Jason's been knee deep in videogames since he was but a lad. Cutting his teeth on the pixely glory that was the Atari 2600, he's been hack'n'slashing and shoot'em'uping ever since. Mainly an FPS and action guy, Jason enjoys the occasional well crafted title from every genre.
@jason_tas
Previous Cuphead, Stranger Things, and more at Nindie showcase
Next The Switch blasts again, Blaster Master Zero 2 is here