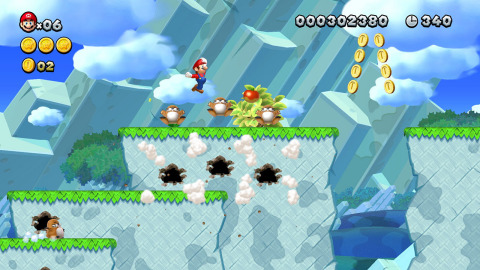 Mario returns to the Switch this week, along with Tales of Vespiria and a few other assorted notables. All in all, a solid week.

It’s always god to see a fresh Super Mario launch. Though, to be fair, this isn’t exactly a totally new affair. While there are some new elements included, New Super Mario Bros Deluxe is more or less the same game(s) that hit the Wii years back.

Still, even with it being basically a re-release, it’s more Mario, and in the classic form. Nothing to complain about there. And if you skipped it the first time around, well I guess it is kind of new.

This week also brings Tales of Vespiria: Definitive Edition, which celebrates that game’s 10th anniversary. Right in line with both of the above titles is Sega’s Out Run, the latest in their classics initiative, bringing old titles back to life.

There are also a few other little gems in there for you to peruse, including Tetraminos. That’s exactly what you think it is, and may or may not be a good time. It’s tempting though, especially if you’re a Tetris fan.

Jason's been knee deep in videogames since he was but a lad. Cutting his teeth on the pixely glory that was the Atari 2600, he's been hack'n'slashing and shoot'em'uping ever since. Mainly an FPS and action guy, Jason enjoys the occasional well crafted title from every genre.
@jason_tas
Previous Q&A: An Interview with Voice Actress Kira Buckland
Next Crafty Yoshi and Kirby games get official release dates

Like Robot Wars, but just a little more high-tech. Take your own fightin’ bot and …