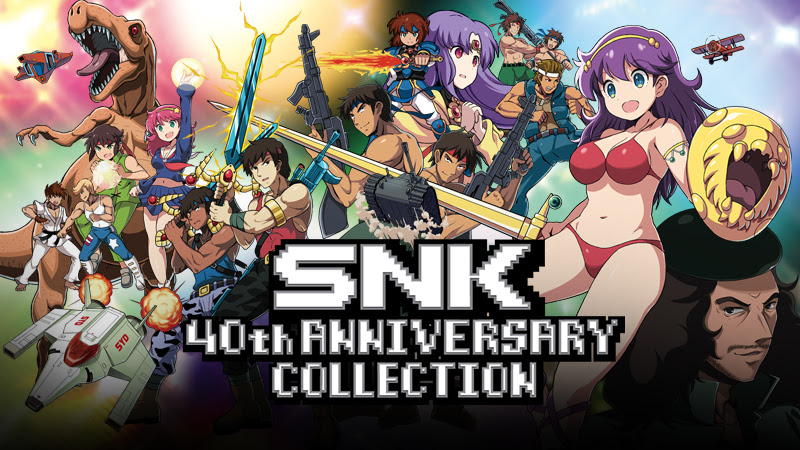 There was a time that SNK wasn’t so fighting game-happy. It was a while ago yes, but the developer/publisher actually delved into a couple of different genres in the arcades. POW, Guerrilla War, and the Ikari Warriors series all gobbled plenty of quarters back in the 80s. Some of those even got pretty darn good NES ports.

Once the company went full Neo Geo, almost all of that ground to a halt. And you don’t honestly see the games that hit before that most famous era all that much. That’s what makes this set all that much cooler. This collection is all pre-Neo Geo titles, and man is it fun.

There aren’t just games here though, and including the extras, the total pack rounds out to be a heck of a lot of fun.

Even though this isn’t Neo Geo stuff, most of what’s here is arcade-derived. Not all though, as there are some NES titles as well. Those being home translations of arcade originals. The best part of that is that they’re presented along side, not instead of, their arcade counterparts. So you can play the original, and then play through the home version for comparison.

As you might imagine, the NES editions aren’t anywhere close to as good looking as the arcade versions, but that’s part of the fun. Actually, in some cases the NES version is more fun (in my opinion). Not in looks mind you, but in fun. The limits of the original Nintendo console made certain things impossible.

That might not sounds great when I say it, but consider that it eliminates stuff like annoyingly cheap swarms of enemies in games like POW. Not to say that the aforementioned isn’t a fun time anyway, but it’s way more fun if you’re not getting completely trashed every two minutes. I have to stress just how cool this collection is though, and I mean in its totality.

Included with the set, is:

Not bad, huh? But wait, there’s more! SNK is adding new games to the set by way of feee dlc packs. And those include a bunch more arcade titles, though they’re way lesser known that what you see here. Well, maybe except for Time Soldiers, that’s kind of well known… I think.

Also cool is that you can flip between the Japanese and English copies of games. So you can, in some cases, see the difference between arcade and home versions, as well as what different territories had to offer Cool stuff all around.

Everything seems to control really well too, with no weird issues that I noticed. Speaking of, the graphics are spot on, whether you’re talking about an arcade game, or a NES title.

Then there are the extras

Yes, in addition to all of the above, there’s a ton more for you to do and see in the collection. While you can play games, you can also watch them. I don’t know why you’d really want to do that, but you can. I do know why you’d want to check out the museum though, ’cause it’s awesome. The museum is usually a feature that I skip in these kinds of titles, but I’m glad I didn’t here. Opening up the museum, you’ll see a trio of options. The first is “SNK Complete Works 1978-1990”. And it is great. 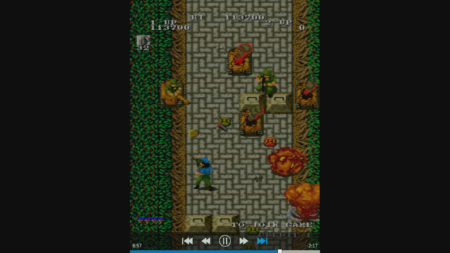 Games are broken down by year here, and you can get a real feel for the SNK timeline. Once you select a game, you’ll see some bullets about the title, as well as some screenshots. It’s not all that in-depth, but you kind of wouldn’t want it to be. This is meant to be a quick sift through the company’s gameography, nothing more. And it’s really fun for that.

Over in the Bonus Features, you’ll find stuff like Behind-the-Scenes, Guide Books (that I’m pretty sure are all in Japanese), and even advertising. As with the museum, this is some really fun stuff. And I imagine that if you’re a big SNK buff, it’s even more so.

Finally, there’s a section for the game music in the collection, which is pretty self-explanatory. The caveat here is that the music is nothing all that interesting. But it’s still cool that it’s here.

A solid set of classics

SNK has produced a really nice set of their most classic titles here. You get a bunch of cool games with more on the way (by December 11th), and all those nifty extras to thumb through. If you dig old school arcade titles, I think you’ll like what’s included, and if you’re a big SNK fan it’s probably safe to say that you’ll love it.

Great choice of games, though there could have been more - 85%

Actually good extras that are fun to dig into - 85%

Do you like the SNK of olde? If you do, then you're almost assuredly going to like this set of classics from both the arcades and the NES. Together with a growing list of titles (thanks to free dlc), you'll also find a cool museum and more included. It all comes together to make for a terrific compilation of games for the Switch. Here's hoping there's more to come.

Jason's been knee deep in videogames since he was but a lad. Cutting his teeth on the pixely glory that was the Atari 2600, he's been hack'n'slashing and shoot'em'uping ever since. Mainly an FPS and action guy, Jason enjoys the occasional well crafted title from every genre.
@jason_tas
Previous Episode 52: Call of Just Cause
Next Opinion: Red Dead Redemption 2 is Bad, Actually