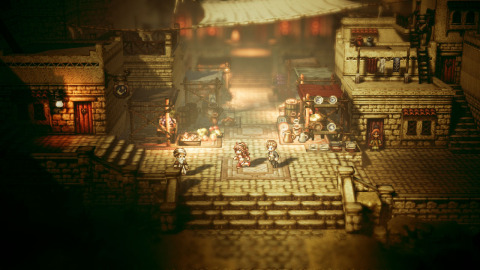 Octopath Traveller smashes retail to the tune of one million units

Old school JRPG gameplay met knock-out graphics in Octopath Traveller. What could have been a sleeper hit has officially dropped the “sleeper” tag.

I didn’t see Square Enix’ classically styled Octopath Traveller being as big of a hit as it’s become. That’s not to say that it’s a bad game though, since the exact opposite is true. The game is flat out amazing, and in many ways feels like the evolution that JRPGs maybe should have gone through instead of heading into the third dimension.

And yes I know that there have been amazing modern RPGs, but if you see Octopath in motion, I think you might agree with me. Fortunately that’s free to do, since her game also has a three hour long demo on the eShop.

If you haven’t played Octopath, it pretty much looks and feels like the SNES classics, in the vein of Final Fantasy III. Picture that but with modern special effects and some of the best hand-drawn looking graphics in years. It’s also a Nintendo Switch exclusive, which makes this milestone all that much more impressive.

One million copies of Octopath Traveller have been sold globally. The game debuted at number 3 in the UK according to Eurogamer. It also sold through two waves of shipments, including selling out completely after just one day in Japan. On top of that, it also took over the top spot on Nintendo’s eShop.

Does all of this success bode well for more classic style RPGs? Lets’ hope so.

Jason's been knee deep in videogames since he was but a lad. Cutting his teeth on the pixely glory that was the Atari 2600, he's been hack'n'slashing and shoot'em'uping ever since. Mainly an FPS and action guy, Jason enjoys the occasional well crafted title from every genre.
@jason_tas
Previous Patrick Stewart returning to the role of Jean-Luc Picard for new Star Trek TV show
Next BG’s Game of the Month for July 2018 is Octopath Traveller