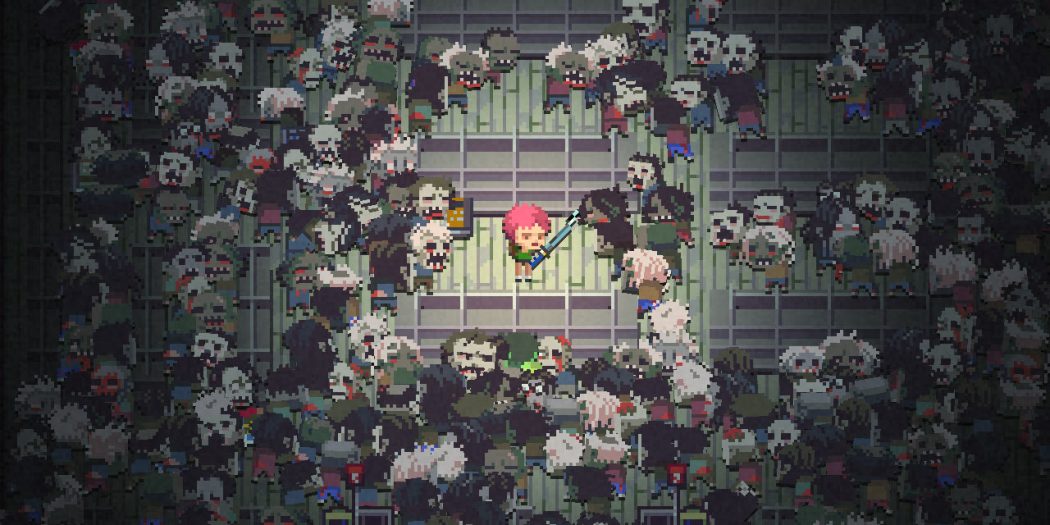 The zombie apocalypse has erupted. Towns are invaded, cities overwhelmed, and the vast majority of humanity has been turned to the rot-side. No place is safe, and no country can offer respite from the shambling hordes of the undead. Well, except Canada. It’s pretty safe there. Maybe.

Death Road to Canada is an interesting title. It’s got a story behind it sure, but its characters are whoever you want them to be, and the entire nature of every little thing in its world is random. It’s also something of a lite RPG, with dialog options and optional pit-stops that you can make. And these aren’t cosmetic, at times the choices that you make can be life or death.

But all of this is wrapped up in a universe that’s only semi-serious. There’s a lot in Death Road that’s comedic, and sometimes it’s downright funny. Yet, somehow the game balances that against a world that’s falling apart, and as dreary as any zombie fiction out there. As I said, it’s interesting.

The primary narrative behind Death Road is the road itself. As a survivor of the zombie apocalypse, you’re looking for any hint that some part of the former human civilization still exists. What you end up gathering, is that Canada is untouched. But think no more about it, because that’s where the structured story begins and ends. Everything else is all about one thing – the road. Well, almost everything.

When you fire up Death Road, you’re tasked with either picking a random character, or creating one. Then you get to assign a partner for your survivor; someone to travel the hard road to the frozen north with. After that, you hit the road in a car that probably isn’t all that great. And even if it is, it’s not going to stay that way.

As you travel the hard route from Florida to Canada, you’ll run into all kinds of things on the asphalt itself. These will take their toll on your ride, and potentially leave you stranded, walking the rest of the way. Or at least till you find another. That’s not something that you want by the way, as it’s not the most friendly of passageways. 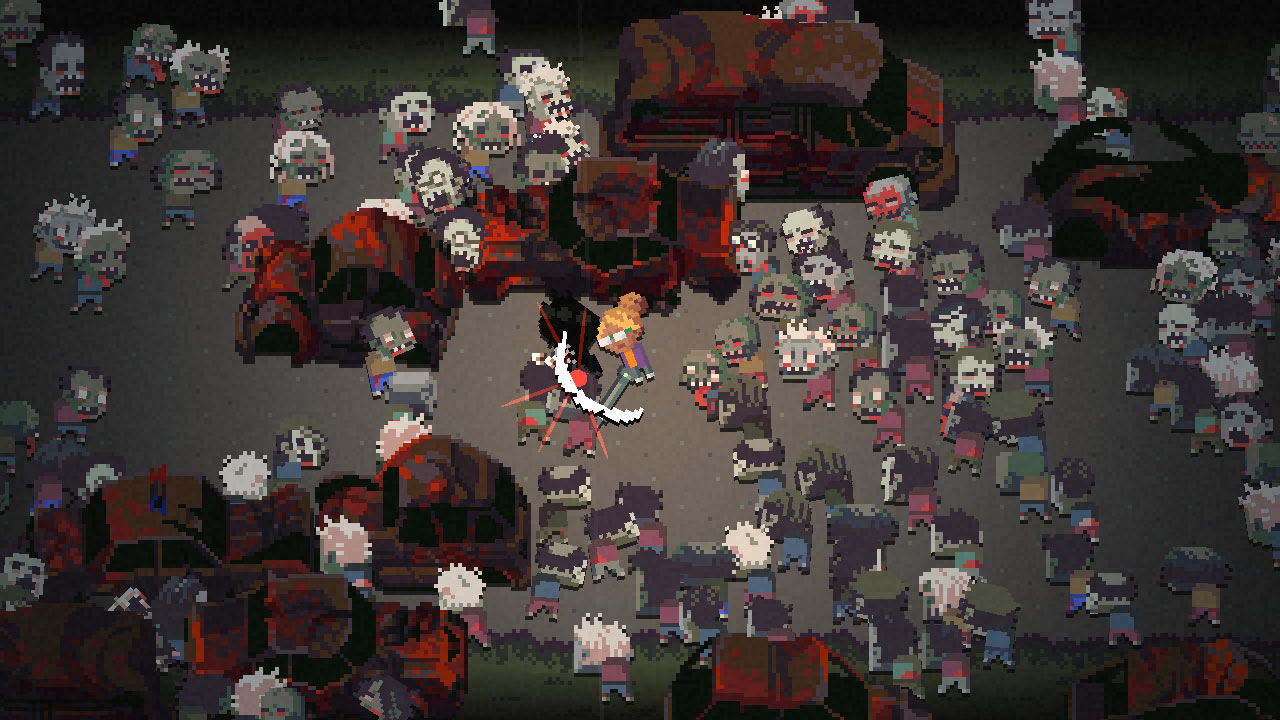 Whether driving or walking though, you’ll run into plenty of places to visit.

Towns, farmhouses, and even shopping districts and gas stations all litter the road. You’ll need to visit all of them, in order to stock up on supplies (including food), and gas for your car. That can be in very limited supply too, so grab some whenever you can.

Some of these places can be downright creepy too, not to mention fatal. Zombies are everywhere, and that includes all of the places that you’ll stumble across on your trip. The only question is how big the herd is, and how volatile they are.

Fortunately, the game actually tells you that info before you head into a locale. It’s pretty cool too, since knowing what you’re up against is immensely important when assigning kit to your team. Yes, that’s right, you’ll find a ton of different weaponry on your journey, as well as health sprays, and equipment like flashlights. It’s actually pretty impressive how much you can gather. Each team member can hold onto only three things though, so you have to pick carefully. Just a tip though, make sure someone has a health spray. 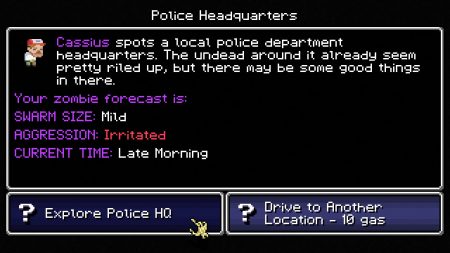 While we’re talking about the team too, I should probably throw in that you’re not assured anyone other than who you start with. Most of the time you’ll run into at least a few people though, that you can talk into taking a ride with you.

These people will assist in combat, play into side-quests, pick up new weapons for themselves, and even make small talk in the car. It’s a cooler and more in-depth system than it seems like it should be. And if your main created character dies, you’ll be playing as whoever’s left. So it pays to build a team.

As I mentioned, the side quests that you can go on are pretty cool in Death Road. Yes, there are the locations that you can leave your ride to explore, including trading posts, but there are random options that’ll come along as you drive too, that are non-interactive. These can be things like dealing with bandits assailing you while you try to camp for the night, to trying to defend a settlement in exchange for food or weapons. 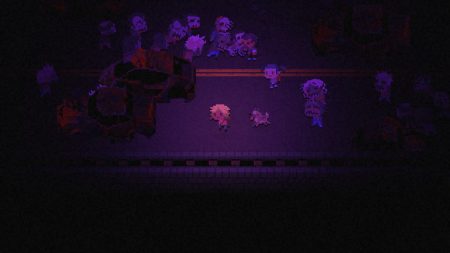 It’s fun to have these things pop up, even if they can end in disaster. Developers Rocketcat Games and Madgarden really worked to create a world where things do truly feel random, and it’s yet another element that makes Death Road feel like a much “bigger” game than you might have thought it was.

Even with all the content that I’ve mentioned, it’s still important to remember that this is an indie title. That and that it’s randomized. So, bottom line, you’re not going to get graphics that look like a triple-A zombie shooter or hack’n’slash. That doesn’t mean that Death Road doesn’t have its charms though.

It actually has that in spades. And some of the zombie variations are downright creepy. I can’t understate how much personality comes across in the cutscenes that play while you drive, or in the comments that you’ll all make to each other as you drive. It’s really fun stuff.

Yes, “fun”. I know I might have painted a pretty serious picture of what Death Road offers, but it’s actually just as fun as it is grim. There’s quite a bit of comedy spread throughout this game, which comes by way of the above commentary. Rocketcat Games and Madgarden have done a remarkable job with that.

What wasn’t the best thing in the world was the control. It’s good enough honestly, and is never all that big of a problem, but I found the game to move a little slow at times. There’s a stamina system at play, so you can’t just swing your weapon of choice wildly, and sometimes that equates to something not that fun.

Let’s be honest, there’s nothin realistic about Death Road, so to have that kind of thing in a game that (I think anyway) should have been purely arcade-like in terms of combat isn’t the best. Still, it’s nothing terrible, and doesn’t really hamper the fun much. Honestly it leads to some tense situations.

While Death Road to Canada is indeed a randomized game, it’s one that even genre-haters will actually want to play through. I can say that since I definitely am one. Since the nature of the adventure itself means that you’ll be visiting random locations, Death Road actually manages to get the gameplay style to play to the narrative. 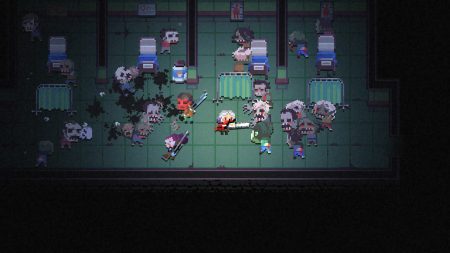 I usually can’t stand these kinds of games, but this one does such a good job with everything, I find myself wanting to play through its “story” again and again. Not that each play-through lasts all that long, since it’s a tidy trip, but that’s half the fun considering the varied nature of it.

I should also mention that, in addition to the main mode, there are a few others. There’s one that changes the characters you come across to mostly custom ones (invite your family to the apocalypse!), a rare characters mode that places “special characters” into the game, and modes that make the trip longer, shorter, or tougher.

In all Death Road to Canada offers a ton of bite for your buck, more than enough to keep you busy, especially with the two player co-op play. Yes, I would have rather have seen a crafted narrative here, instead of a story that you basically make as you go, but that’s me. If you like stuff like this, you’re going to love Death Road. And if you don’t, well I think you’re still going to like this game just fine. I do, and I’m still kind of stunned at that.

A "randomized" game with braaaaaaains

Graphics are fun, but aren't anything special - 77%

Randomness that actually make sense, in a well detailed and fun world - 95%

Do you like "randomized" roguelikes? Do you not like "randomized" roguelikes? Either way, I feel pretty comfortable saying you'll like Death Road to Canada. It's fun, throws a ton of cool stuff at you, is loaded with neat variations on its main play mode, and even lets you bring a pal along. No, it's not going to plow you away with its looks, but it doesn't have to because Death Road is so much fun... and maybe a little creepy too.

Jason's been knee deep in videogames since he was but a lad. Cutting his teeth on the pixely glory that was the Atari 2600, he's been hack'n'slashing and shoot'em'uping ever since. Mainly an FPS and action guy, Jason enjoys the occasional well crafted title from every genre.
@jason_tas
Previous Seems like you can officially forget about the Virtual Console on Nintendo Switch
Next Captain America #1 adds Joe Jusko variant cover