Yeah, we’re mainly reporting on New York’s Toy Fair this week, but there’s another con happening as well. And Dark Horse has just made a pretty awesome announcement at Emerald City Comic Con, as they’ll be teaming yet again with Nintendo. This time it’s for the Super Mario Encyclopedia.

“Dark Horse is incredibly proud to continue our partnership with Nintendo,” said Dark Horse President and Founder Mike Richardson. “Together, we’ve produced beautiful art books to honor the ground-breaking games Nintendo’s created. We’re proud to give fans another way to appreciate the material.” 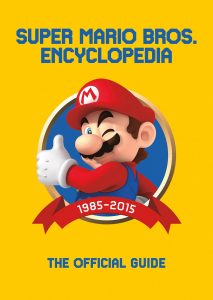 I’m a big fan of Dark Horse’s encyclopedias and such, so I am extreme;y excited to see them taking on one of the greatest game series’ of all time. That’s Super Mario Bros of course, not that this new book will be limited to games under just that title.

“All seventeen Super Mario games” will figure into this book, “from the original Super Mario Bros. to Super Mario 3D World”. And oh my does this sound phenomenal.

Track the evolution of the Goomba, witness the introduction of Yoshi, and relive your favorite levels. This tome also contains an interview with producer Takashi Tezuka, tips to help you find every coin, star, sun, and mushroom—even explanations of glitches! With information on enemies, items, obstacles, and worlds from over thirty years of Mario, Super Mario Encyclopedia is the definitive resource for everything Super Mario!

The book will weigh in at a very nice 256 pages, and cost just $39.99 USD. When’s it hit stores? This year. Look for Super Mario Encyclopedia this coming October the 23rd.

Jason's been knee deep in videogames since he was but a lad. Cutting his teeth on the pixely glory that was the Atari 2600, he's been hack'n'slashing and shoot'em'uping ever since. Mainly an FPS and action guy, Jason enjoys the occasional well crafted title from every genre.
@jason_tas
Previous Megaman Legacy Collection 1+2 Gets Switch Release Date
Next Toy Fair 2018: NECA booth highlights – Aliens, Predator, Crash Bandicoot and more