Street Fighter gets literary in new novel from Udon

Udon has been doing some interesting things as of late, and the Street Fighter Novel is certainly evidence of that. 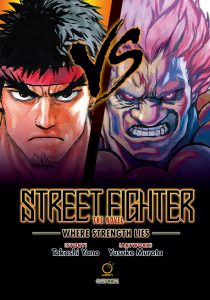 Street Fighter isn’t a franchise that’s really known for books. Actually it’s not even all that well known for its story… at any level. Udon has done a great job though, of fleshing out that narrative in its comics. The publisher has produced a steady stream of comic books based on Capcom’s World Warriors for years now, and there’s no end in sight. A novel though, isn’t really something that I saw coming.

The hardcover book will clock in at 256 pages, so it’s no light weight. And it won’t be entirely without visuals either. Udon says that the book will feature not only a new story from Takashi Yano, but also art from Yusuke Murata in every chapter. The publisher says that the stories included will center on a few big name fights, including “Ryu VS Akuma, Chun-li VS Elena, Guile VS E.Honda, Sagat VS M.Bison”.

Now, don’t get confused, this is a book. Its fights play out in the form of the written word. Even though there are some illustrations, Yano’s writing is the star. And that should make for a very interesting, not to mention unique, experience for any Street Fighter fan.

Expect it to hit bookstores the coming December.

Jason's been knee deep in videogames since he was but a lad. Cutting his teeth on the pixely glory that was the Atari 2600, he's been hack'n'slashing and shoot'em'uping ever since. Mainly an FPS and action guy, Jason enjoys the occasional well crafted title from every genre.
@jason_tas
Previous Continue the fight against the Nazis in Wolfenstein II’s post-launch dlc
Next Rasputin: The Voice of the Dragon #1 (Comics) Preview