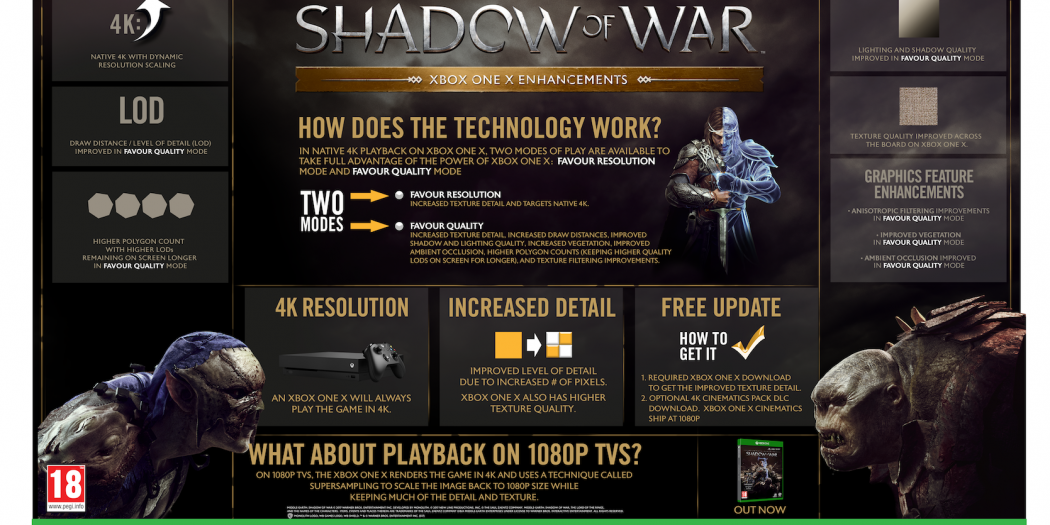 Are you a Lord of the Rings fan who’s getting an Xbox One X this week? Then you’re going to love what Warner Bros has in store for the recently released Shadow of War.

Middle-earth: Shadow of War has already made a decent impact with its release not too long ago. The game followed up on the already pretty great Shadow of Mordor with improvements to the Nemesis system and all new things to do. So needless to say, it was probably already worth a look if you happen to be a Lord of the Rings super-fan. With the release of the stat-boosted Xbox One X this week though, it’s about to get  whole lot prettier.

Not that that’s all you’ll get in the update to the game, which fine-tunes it for X, but it’s sure to get a visual boost. According to Warner Bros, the game now plays in 4k on the X with improved detail. Expect a higher poly count, boosted draw-distance, and a surprising ability for choice.

You can actually pick what you’d rather allocate resources to in this update. So whether you prefer “detail” or overall “quality”, you can actually make the choice in the game’s new X-specific settings. Pretty slick.

Here are the details in one convenient image: 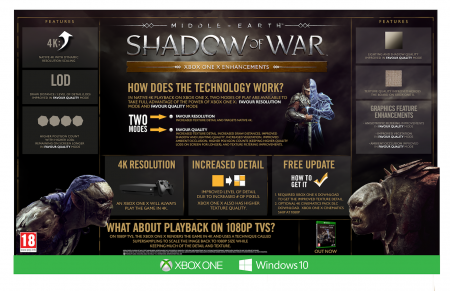 Jason's been knee deep in videogames since he was but a lad. Cutting his teeth on the pixely glory that was the Atari 2600, he's been hack'n'slashing and shoot'em'uping ever since. Mainly an FPS and action guy, Jason enjoys the occasional well crafted title from every genre.
@jason_tas
Previous Avengers: No Surrender teaser trailer emerges
Next In Stores This Week from DST: Justice League, Dark Tower, X-Men, Elf and More!