Nintendo further commented on the availability of the forthcoming SNES Classic today, but that’s not all. The NES Classic will be returning to stores in 2018!

Well, well, well. Isn’t this an interesting little development. Only yesterday we reported on Nintendo of America president Reggie Fils-Aime, as he commented that the SNES Classic would be in solid supply this Holiday. Those comments however, weren’t met with the greatest response from some fans, and that included us.

But now here we are, and Nintendo has officially issued a statement about the SNES… and then some.

First, about the SNES Classic, there are going to be more of them out there than the NES Classic. Apparently, a lot more. According to the company, the SNES Classic will see more units shipped on launch day than were shipped for the NES Classic… in it’s entire 2016 run. I’m extremely hesitant to say this, but that certainly seems like there’ll be enough out there for fans who couldn’t get in a pre-order. Hopefully. 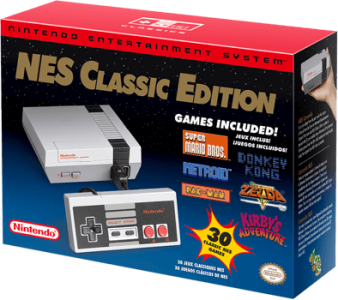 And I did say there was news about the NES Classic, right?

You bet I did, and it’s very, very good news if you missed out on it. That’s because it’s coming back to retail.

The original Nintendo throwback console will be heading back to store shelves this coming summer. Yes, you read right. The formerly discontinued retro-system will be sold at stores once again.

Fresh shipments will start hitting in about a year’s time. Nintendo says they’ll elaborate on the specific date in the future, so watch for that. But honestly, it’s pretty cool just knowing that more are on the way.

Unexpected as it is, this is pretty welcome news for legions of fans who could not find an NES Classic at retail, and refuse to pay the sky-high eBay prices. Somebody at the Big N must’ve realized how completely insane it was to cut off a console that sold out everywhere within seconds.

Jason's been knee deep in videogames since he was but a lad. Cutting his teeth on the pixely glory that was the Atari 2600, he's been hack'n'slashing and shoot'em'uping ever since. Mainly an FPS and action guy, Jason enjoys the occasional well crafted title from every genre.
@jason_tas
Previous Episode 12: First Football Sunday and Dragon Ball Xenoverse
Next Reminder: Mezco’s blue and yellow Wolverine exclusive goes on pre-order tomorrow