You might have read our review of NetherRealm’s Injustice 2 which hit consoles last week. Or maybe you’re just playing the heck out of it, blasting your way what’s a phenomenal lineup of DC Comics heroes and villains.

Much like the aforementioned, Justice League Task Force stars a selection of DC characters, and is a one-on-one fighting game. But that’s where the comparisons come to an end. Like, abruptly. Because while a bunch of 2D fighting games from the 16bit era have aged startlingly well, this one… hasn’t.

A League of their own

Let’s start off with a look at the roster, because it’s easily one of the most disappointing things about JLTF. That’s because there are a total of nine. Yes, nine. In total you get Flash, Batman, Superman, Wonder Woman, Aquaman, and Green Arrow in the campaign.

Multiplayer modes meanwhile, give you Cheetah, Desparo, and the lord of Apokalips itself – Darkseid. That’s right down there with some of the oldest fighters, like Street Fighter II and Mortal Kombat (the first one). But you kind of have to keep in mind that expansive selections of playable characters wasn’t really common practice in the mid-nineties.

But while the classic fighters I mentioned might’ve managed to overcome limited character options with some great gameplay, JLTF doesn’t. 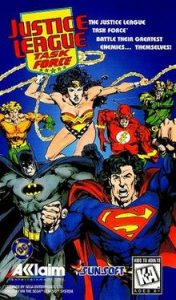 Despair(o) at these clunky controls and brutal difficulty

Justice League Task Force’s controls aren’t horrible, but they are a little clunky. The game plays at an odd pace to begin with, it’s sluggish. But on top of that, it’s hard to pull off special moves correctly. Well, I should clarify that – it’s odd to pull off what special moves there are. Cause man, it seems like there aren’t too many.

On top of that, the game seems overly hard. I even dialed back the difficulty, and JLTF gave me fits with it’s sludge-like speed and moves that consistently seemed to miss the mark. Of course, the CPU didn’t have that issue.

Nope, the computer controlled adversaries had no issue not just performing moves, but also to relentlessly press attacks. There’s seemingly no strategy happening either, it’s just keep charging at you and throwing moves till you lose. It makes matches a chore and a half.

Not that any of the matches make sense.

I though we’d end this review on a good note, so I’ll mention the music first. It stinks. Most of it seems to be super-basic and isn’t anything that you’d even remotely find yourself humming along to, or remembering for any length of time after you play. Toss the sound effects in there too, ’cause they’re also nothing to talk about.

Now that that’s out of the way, I do have to say that the graphics are kind of nice. No, not the backgrounds, because they’re extremely lackluster, but the sprites are shockingly decent.

The characters are large and well detailed, and the colors are great. Nice and bright, these comic book heroes seem to pop right off the TV. Too bad that’s the only really nice thing I can say about the game.

It's the Justice League! Sorta.

There isn't much to like about this 16bit brawler. The story doesn't make a lot of sense, the characters list is way too small, the presentation is iffy, and the modes are limited to the most basic of offerings. If you're looking for a 16bit DC Comics title to spend an afternoon with, look elsewhere.

Jason's been knee deep in videogames since he was but a lad. Cutting his teeth on the pixely glory that was the Atari 2600, he's been hack'n'slashing and shoot'em'uping ever since. Mainly an FPS and action guy, Jason enjoys the occasional well crafted title from every genre.
@jason_tas
Previous McFarlane Toys picks up Star Trek license, Discovery and classic series’ first up
Next Xbox Games With Gold For June: Assassin’s Creed, Watch_Dogs And More 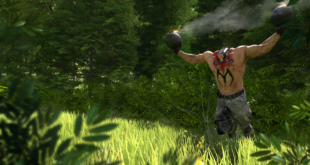