Mr. Higgins Comes Home, and just in time for Halloween

Vampires, werewolves, and Mike Mignola. Dark Horse Comics and artist Warwick Johnson-Cadwell are teaming with the Hellboy creator for a special Halloween treat.

When the veil is thinnest…

“This one started when a mutual friend pointed out Warwick Johnson-Cadwell’s affection for sad werewolves. Then Warwick and I exchanges a few words about vampires and that was it,” said Mike Mignola. “MR. HIGGINS COMES HOME is my very obvious nod to any number of old Hammer Dracula films and my all-time favorite vampire film, Roman Polanski’s THE FEARLESS VAMPIRE KILLERS.” 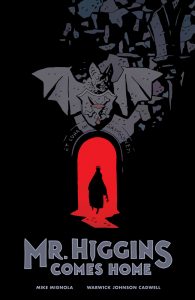 In MR. HIGGINS COMES HOME, preparations begin at Castle Golga for the annual festival of the undead, as a pair of fearless vampire killers question a man hidden away in a monastery on the Baltic Sea. The mysterious Mr. Higgins wants nothing more than to avoid the scene of his wife’s death, and the truth about what happened to him in that castle. However, these heroic men, sworn to rid the world of the vampire scourge, inspire Higgins to venture out and to end the only suffering he really cares about–his own.

“Working on a project with Mike Mignola is an amazing thing to be able to do,” said Warwick Johnson-Cadwell. “His art and storytelling is a massive influence and inspiration for me and chatting with him about werewolves, vampires and the like was very exciting. When MR. HIGGINS COMES HOME turned up in my email I was in awe. It’s a rollicking vampire romp right in the Hammer vein and it’s a pleasure to be slapping that crimson goop they used for blood all over it.”

Man is this sounding like an awesome book. Yes, it’s a little bit of a bummer that it’s not a part of the Mignolaverse (for me anyway), but it just sounds so freaking great. Calling up the feel of classic horror films, iconic monsters and all, is cool all by itself. But combined with Mignola’s writing and Johnson-Cadwell’s impressive pencils, this could be one that horror fans won’t want to miss.

Watch out for Mr. Higgins Comes Home, just in time for Halloween. It’ll be landing on comic shop shelves on October 25th, and in bookstores on the 31st.

Jason's been knee deep in videogames since he was but a lad. Cutting his teeth on the pixely glory that was the Atari 2600, he's been hack'n'slashing and shoot'em'uping ever since. Mainly an FPS and action guy, Jason enjoys the occasional well crafted title from every genre.
@jason_tas
Previous Gigantic slip-cased Star Wars collection on the way from Marvel
Next Prey getting a pre-release demo on PS4 and Xbox One