Limited edition on the way for Nintendo’s Fire Emblem Echoes: Shadows of Valentia

The latest Fire Emblem title for the Nintendo 3DS will be getting a special bundle, loaded up with goodies.

Maybe it’s me, but I’m not used to getting limited editions from Nintendo. And yet, here we are. Just a bit past the LE of Breath of the Wild, we’re looking at yet another special box. This time of course, it’s not for a Switch game, but a 3DS one. And Fire Emblem is quite a big release for the console.

A reimagining, Shadows of Valentia is actually a redux of Gaiden,  which was released in Japan only. So if you haven’t ever had access to a Famicom, then this one’s new to you. Not that it wouldn’t be pretty new anyway. Valentia is packed with redone graphics and cinematics. And there’s new gameplay too, as it’s got free-roaming dungeons. Nintendo says that’s a first for a Fire Emblem title.

Now that’s all well and good on its own, don’t get me wrong. But Nintendo has a little special something for the biggest of fans. The Fire Emblem Echoes: Shadows of Valentia Limited Edition bundle will hit day and date with the standard version. And this limited edition will have a good deal extra packed in. 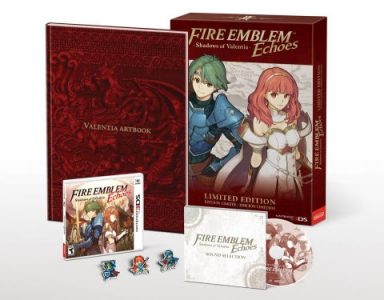 Pretty neat, and all together a pack that’ll set you back $59.99 USD. You might have to hunt a bit for it though, as Nintendo says it’ll be available only at “select retailers”.

But wait, there’s more! Also hitting along with the game on May the 19th are a pair of new Amiibo. Both Alm and Celica will be made available, both of which will open up new dungeons and serve as heroes in-game.

Also launching on May 19 are the Alm and Celica amiibo figures, available only as a set at a suggested retail price of $24.99. When used in the game, these amiibo will activate their own exclusive dungeons, allowing heroes to earn items and level up their armies further by defeating bosses. By selecting Mila’s Turnwheel from the menu on the overworld map, they will also be able to take advantage of their Alm and Celica amiibo in battle. During combat, players can sacrifice a portion of Alm or Celica’s health in order to summon a computer-controlled illusory hero, which will act as a temporary ally for a single turn.

As Alm and Celica get stronger, their stats can be saved to their respective amiibo, allowing their summoned unit to grow in strength alongside them. In addition, all Fire Emblemamiibo from the Super Smash Bros. series can be used to summon an illusory hero of that character, allowing players to seek assistance from spectral visages of Marth, Ike, Roy, Robin, Lucina and the upcoming Corrin amiibo. All other currently available amiibo are also compatible, and will summon an additional monster to the battleground to assist players in battle, providing some much-needed help in case of a strategic emergency.

Jason's been knee deep in videogames since he was but a lad. Cutting his teeth on the pixely glory that was the Atari 2600, he's been hack'n'slashing and shoot'em'uping ever since. Mainly an FPS and action guy, Jason enjoys the occasional well crafted title from every genre.
@jason_tas
Previous Dark Horse preps new Mass Effect and Dragon Age books for launch
Next Torment: Tides Of Numenera (Xbox One) Review