Lumo is a strong platformer from the days of old. Isometric in nature, players move through a series of rooms to find collectibles and more. So to the point, simply survive. 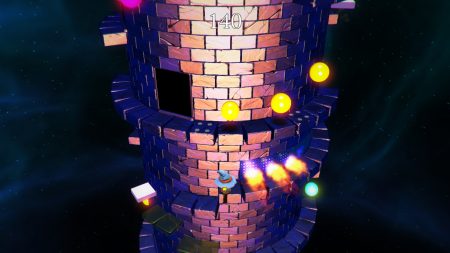 The game starts out as the player controlling a child. Either a boy or a girl in a color chosen by the player, and you are running into what appears to be a summer camp for video game design. After running all the way to the back of the building, you are sucked into one of the machines, and the game really begins.

The first thing to mention is that Lumo has an indescribable charm to it. The rooms are all pretty, no matter what is going on within them, and the main wizard character stands out among the many environments. I never had a problem telling where I was within a room while playing through Lumo.

Every visual aspect has its own unique charm. The main character looks like Vivi, or a black mage from earlier Final Fantasy games and all the aspects of the rooms fit together to create an alluring, yet clearly dangerous world for you to explore. Starting without even the ability to jump, the game has very slight, and I mean very slight, nods towards metroidvania type games. 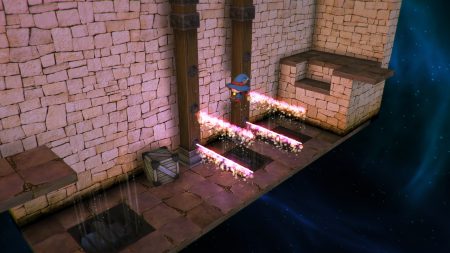 Throughout the game, you will find the ability to jump, and later on, the ability to see invisible platforms thanks to a wand. At its core though, the isometric platforming inspirations come through wholesale.

The music in Lumo is understated, yet effective. It plays the part that great video game music should always: It is in the background, but you won’t really notice it unless you’re really looking for it. The music adds to the tension and emotion felt throughout the game, and I am happy that the developers took the understated route, instead of forcing the music to come through loud and clear no matter what was going on in the game at the time.

At its core, Lumo controls exactly how you would want an isometric platformer to control. The main character is very responsive to the player’s inputs. The rooms and puzzles are cleverly designed so that some puzzles are definitely head-scratchers. Nothing is too hard to work through with a little thought or practice though. There was no room in Lumo that had me totally stumped, but playing through I had a lot of “a-ha!” moments. When those happen, they’re great.

The biggest problem I had with Lumo is the manner in which the game deals with depth perception. I have two eyes, I can see fine. Many of the rooms, however, require precise jumps. This isn’t a problem until you can’t see how far exactly you need to jump, or the distance is just not clear.

There were a couple instances during my time with Lumo where I had to put the controller down because I continued to miss a jump over and over and over again. I haven’t disregarded the possibility that I just suck at games, but I can usually hold my own with platformers. In these instances, I didn’t feel as though the deaths were my fault. The deaths were annoying, tedious, and frustrating, especially when I am not sure how I could have done anything differently to make the jumps a success.

That said, the rooms with strong design vastly outweighed the frustrating rooms. For the majority of my play time, I was excited to have figured out a room and move on to the next puzzle.

The game has many different elements in terms of gameplay as well. The platforming never gets dull. There are a few segments to break up the platforming too, and these include a mine cart ride in the same vein as Donkey Kong Country. These were great moments and they really brought the game to another level.

Lumo offers a few different modes. The standard mode, adventure, allows the player infinite lives. Death only resets the room the player is in. In Old School mode, there is a limit on lost lives. This difference makes sure that players will find a way to play to suit them.

The tight controls make sure that you always feel good playing Lumo. Graphical and auditory design help this, but unclear jumping segments hurt the overall experience

Erich was introduced to gaming by his grandfather before he could walk. Since then, he has grown up loving Nintendo and most games in general. He couples his love of videogames with journalism to cover news, provide reviews and tell it how it is in the gaming world.
Previous Top 5 Wrestling Games of all Time – Day 3, Sucka!
Next Battle Bots becomes Blade Ballet