Activision has announced that a trio of Avenged Sevenfold’s tunes will be coming to the upcoming Guitar Hero Live. 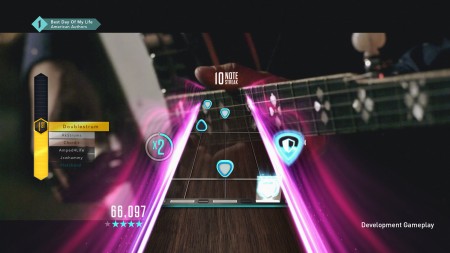 “Shepherd of Fire”, “Buried Alive”, and “Nightmare” are all set to be included in the new rhythm game’s Premium Shows feature, which will give the band’s fans playing GHTV something to shoot for. As you may or may not know, the Premium Shows are just that, and are playable in GHTV if you’ve accumulated enough in-game challenge victories.

Once you gain entry to a Premium Show, and beat the songs included therein, you’ll be on the receiving end of some cool and exclusive items like “guitar upgrades, player cards, note highways and more”. So aside from the fact that you’ll get to rock along with some of your favorite band’s music videos, you’ll also get some stuff to play with in the game and show off.

Looking great so far, Guitar Hero Live is set to arrive for the PS4, PS3, Xbox One, Xbox 360, Wii U, Apple TV, iPad, iPhone, and iPod Touch (whoa is that a to of platforms) on October 25th. Ready to rock?

Jason's been knee deep in videogames since he was but a lad. Cutting his teeth on the pixely glory that was the Atari 2600, he's been hack'n'slashing and shoot'em'uping ever since. Mainly an FPS and action guy, Jason enjoys the occasional well crafted title from every genre.
@jason_tas
Previous Amnesia: The Dark Descent Free On Steam
Next Here comes a new Challenger- meet Street Fighter V’s Rashid