Deadpool and Cable to re-team for Marvel’s Split Second

It was only a matter of time. Deadpool and Cable are back at it for another mis-matched team-up in Split Second, a new mini-series from Marvel Comics kicking off this October. 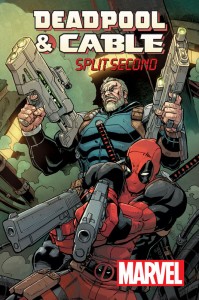 Call them a duo with a special kind of dynamics. Call them an odd couple, but with guns. Call them the 1990s distilled down in to two characters. Call them what you will, but know this – DEADPOOL AND CABLE ARE BACK, BABY! The Marvel U’s most powerful pair is returning for an all-new series this fall in DEADPOOL & CABLE: SPLIT SECOND #1 – the newest Marvel Infinite Comic Series debuting in October!

The fan-favorite Cable & Deadpool creative team of Fabian Nicieza and Reilly Brown are returning to chronicle new adventures of the Merc With a Mouth and the Solider With a Scowl! Specially designed and optimized for digital devices, Marvel Infinite Comics push the boundaries of what’s possible with digital comics. Taking full advantage of the latest technology, Marvel Infinite Comics showcase the new storytelling possibilities of a digital canvas while still staying true to the medium’s greatest strengths! Be there as Nicieza & Brown take full advantage of these exciting and dynamic new story possibilities as they bring all the shooting and stabbing of Deadpool and Cable to the digital comics frontier!

When Cable gets a vision of a terrible future brought on by the death of one man, he knows he must protect him no matter what! Three guesses who’s been hired to kill this guy. Go on, guess. Give up? It’s Deadpool. This isn’t going to be pretty…

Available right at your fingertips, DEADPOOL & CABLE: SPLIT SECONDS #1will be available on the Marvel Comics app (for iPhone®, iPad®, iPod Touch® & AndroidTM devices) and online in the Marvel Digital Comics Shop this October!

‘Odd couple’ doesn’t even begin to describe these two, as Cable and ‘pool started out as pretty much enemies. As the years have gone by though, Wade has risen in popularity to such a massive degree that he’s one of the most popular ‘heroes’ in the Marvel U at this point. And since that description pretty much matches Cable as well (even though he’s been massively underused IMO), a teaming is always something that’s floating out there somewhere as a possibility.

And so, here we are with a second team-up book featuring the two. What makes this one different than the first though, aside from the story, is that this is set to be a digital book, and not be available in comics shops. As a part of Marvel’s Infinite Comics line, Split Second just might be the biggest draw for the service since the series of excellent reads that arrived last year.

Actually, with Deadpool attached, that’s pretty much a guarantee. Make sure you check out Deadpool & Cable: Split Second when it hits Infinite Comics (app and online) this October.

Jason's been knee deep in videogames since he was but a lad. Cutting his teeth on the pixely glory that was the Atari 2600, he's been hack'n'slashing and shoot'em'uping ever since. Mainly an FPS and action guy, Jason enjoys the occasional well crafted title from every genre.
@jason_tas
Previous Divinity: Original Sin 2 announced, hitting Kickstarter
Next Super Mario Maker looks like the greatest Mario game ever… and then some