How does 500 digital Star Wars comics sound? If you’re subscribed to Marvel Unlimited, that’s what you’ve got. 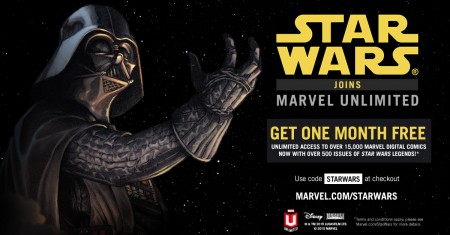 Marvel Unlimited was already pretty great to be perfectly honest. With some 15000+ comics available to read on demand for one subscription price, the service is one of the best in comics if you’re a big reader and love Marvel’s legacy of titles.

Now you can add ‘and are a Star Wars fan’ to that remark as the publisher has added some 500 Star Wars digital comics to their offering slate under the Star Wars Legends banner. New books will also be added regularly, just like with Marvel’s superhero catalog, and they’ve also got some heading to the Discover section, to more easily get you into that Galaxy Far, Far Away. Those books will have a pretty wide spread of characters too, and should be a great primer with the likes of Character Spotlight: Boba Fett, Rise of the Rebels, Character Spotlight: Darth Vader, Rogue Squadron, and The Dark Force Rises.

The comics are available right now if you’re a current or returning subscriber to the service, and can be accessed by using the promo code STAR WARS at checkout. The app, should you prefer your Star Wars on the go, is also available for Apple’s iPhone and iPad, as well as Android devices.

Jason's been knee deep in videogames since he was but a lad. Cutting his teeth on the pixely glory that was the Atari 2600, he's been hack'n'slashing and shoot'em'uping ever since. Mainly an FPS and action guy, Jason enjoys the occasional well crafted title from every genre.
@jason_tas
Previous Chaos enters the Blood Bowl II arena in this new trailer
Next Mortal Kombat (Arcade) Retro Review