What would otherwise be a lighthearted jaunt through a comical high fantasy land, is hindered by a few (albeit major) flaws in design. 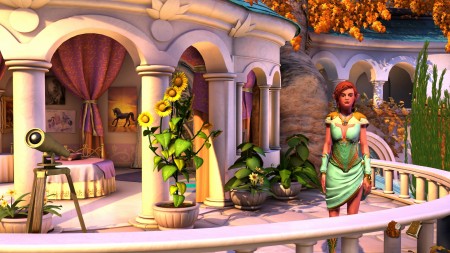 The main cast of characters consists of Princess Ivo, a young Elven princess longing for adventure, Wilbur Weathervane, a Gnomish Mage who just wants to teach others magic, Nate the good for nothing thief (and love interest of Ivo), and Critter, who looks like Cousin It joined the punk scene and dyed himself bright purple.

You begin play as Ivo, and things start out as her mother has locked her in her room and she isn’t feeling well. Out of desperation, she (you) decides she has to escape her confined room somehow, which means sneaking past her guardian, Cheep Cheep (yes it’s a bird, surprising I know). After escaping the room, you make your way to the library to diagnose her ‘illness’. Without spoiling anything, she finds out something surprising, and decides she must make her way to Seastone, the port where she believes the Arch Mage is living. With the help of her father and her friends in the castle, she manages to escape on a hippogriff, without her mother thwarting her plans.

Now would be a good time to point out that KING did an amazing job with character design and world building. Every character is memorable, and the voices were chosen superbly (though the actual synchronization could use some work). TBoUT2 has some of the best character building and design I have seen in a long time.

Something else I want to mention is the world itself. It is packed to the brim (and I can’t stress that enough) with references. Seriously, this game alone could be considered the missing link for all video game universes. In one room (the library), I found a rubik’s cube, the three eggs from Game of Thrones, The Buster Sword from Final Fantasy 7, a Diamond Sword from Minecraft, Frostmourne from World of Warcraft, the iron helmet from Skyrim, Diablo’s head from Diablo III, a stuffed creature resembling Sully from Monsters Inc., and a few others. 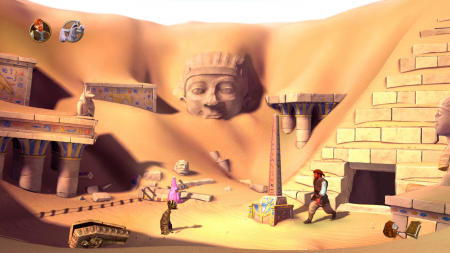 Each of these items had a short description behind them, tying them to the world. As strange as it sounds, all of these references combine and sort of make a new universe altogether. Usually too many references can seem like a bad thing, but in this case, it works perfectly.

I encountered, however, one problem… and it’s a really big one. This problem was partially caused by faulty design, and an issue with my own hardware that made progression… difficult. You see, when you double click a door, it allows a sort of shortcut, to teleport to the next room, without having to waste time walking through the entire room. It’s a neat way to speed up the process, and makes for a handy mechanic.

The problem however comes in with timed puzzles, and you are forced to use this mechanic to skip the room. ‘That’s not so bad.”, you say. To which I reply, you’re right, it isn’t that bad, unless you can’t see the entire room and have to wait for the camera to slowly scroll to the door.

Remember what I said about this being an issue with my own hardware? My screen isn’t wide enough to see the entire room a lot of the time (don’t ask why, I’m not sure myself). So when you, say, have to light a piece of paper on fire and carry it through two rooms and a hallway to light a fireplace (before the fire goes out), well, if you don’t use the ability to skip rooms, you’re out of luck. So tell me what happens, when you can’t see enough of the screen to do that? Yep. Exactly.

It’s a problem that made a simple task brutally hard, and one that I could not really completely blame on my setup alone, since I was at a loss to find a setting I could change to fix the issue. I still had a great time with The Book of Unwritten Tales 2, so I don’t want to make this out to be a killer, but it’s a fairly large technical issue that needs a patch desperately.

Other than that one issue that I mentioned last, I found The Book of Unwritten Tales 2 to be an enjoyable experience. And, major issue aside, I definitely recommend giving it and it’s predecessor a decent shot. I doubt you’ll be too disappointed.

Five parts actual review, 2 parts sarcasm, 2 parts bad puns, and one part self loathing = one of my game reviews.
Previous God of War III remaster on the way to the PS4
Next Activision’s Guitar Hero might be on the way back to a reunion tour